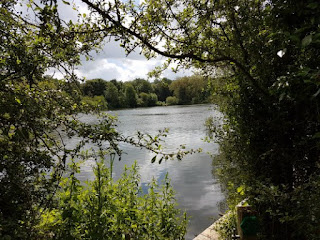 Over a rather early brekkie I watched more “Trailer Park Boys”. I can imagine a *lot* of people wouldn’t understand the show, but for me it really is a laugh-out-loud programme. Mind you I go hysterical over Roger’s Profanisaurus in Viz magazine, so I suppose I am easily amused.

I had a wry smile as I looked at Facebook this morning. The wife of my lesbian cousin (her who went on the Jeremy Kyle show and told the world the exact process by which she artificially inseminated her wife) was rather insultingly banging on about who needs men on Fathers’ Day. I’ve whinged about this pair before. Some people are gay, some are not. It isn’t *really* a big deal, is it? These two seem to think so, and seem to be very defensive about something over which no one is attacking them.
I then somehow got embroiled in a squabble on the “Ashford” Facebook page. I showed my ignorance. Apparently mediums don’t predict or foresee the future. That would be stupid (!) Instead they just pass on messages from the spirit world. It amazes me that anyone would feel that someone going into a trance and predicting the future is laughable whilst at the same time thinking that communicating with the dead is a perfectly reasonable thing to do. It *really* amazes me that these people are allowed to vote and do jury service.

I phoned my dad to wish him a happy Father’s Day, I went round the garden clearing up the dog turds, and then we set off out.
We met up with Karl, Tracey and Charlotte, and had a rather sedate walk round Chilham Lakes. Perhaps a rather shorter walk than we’ve done recently, but a good one. For all that I drove through Chilham for six years whilst working in Canterbury, and I’ve looked at the lakes from the train so many times, I’ve never really walked round the lakes. It was a rather good place to wander. Well-marked footpaths, no serious hills or bushwhacking… it was an ideal dog walk even if Fudge did roll in the dirt. And I couldn’t believe the amount of dragonflies we saw today.

After a short wander we drove into Chilham where we had a pint or two in the beer garden of the White Horse. There were some other people there with dogs, and we had half an hour of general dog mayhem. I did feel sorry for the normal people who were trying to have a quiet pint.

We said our goodbyes, and on the way home we stopped off in Repton Manor where this month’s geo-meet was talking place. It was a shame we were a tad late, but not too late to miss the rather good cakes which had been baked for the occasion. We chatted for a while, then came home, settled the dogs and went to the New Chimneys.

Cheryl had arranged a Father’s Day meal for her portion of the tribe. A dozen of us sat down for dinner. Most had the carvery; it looked good. "My Boy TM" had the breakfast burger. It looked good. I had the barbecue chicken with fries. Whilst it wasn’t burnt, it was very dry. I wouldn’t have it again.
And the place was a tad hot. Hot to the point of making me feel rather iffy.
But for all that, it is always good to meet up with family,

We came home, "er indoors TM" dished out ice cream and got on with painting. I stuck some photos of the day onto Facebook, and then had a little doze.
Poldark is on later. I like that show. Or, to be more precise, I like Demelza’s heaving bosom. I wonder if the show would still be so good if Demelza was to have a day off?
Posted by Manky Badger at 8:10 pm