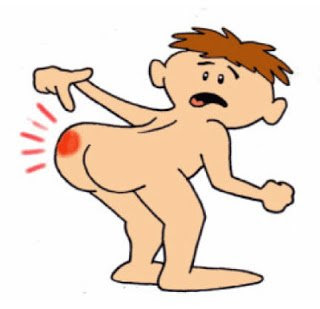 Over brekkie I watched another episode of “Trailer Park Boys”; it is the sort of show that sounds absolutely dreadful when you describe it, but I rather like it. As I watched it, so Fudge snored and I fidgeted on the sofa. I could not get comfortable. This has been a problem for the last week or so. For all that I’ve been a tad lax on the diet recently, I can feel the weight loss is slowly continuing. My hands feel bonier what I rub them together. My face isn’t so fat when I have my morning shave. And my bum is sore. When I sit I tent to slouch and that worked well when I had a much fatter arse. However now some of the padding has gone, the bit of my backside which makes contact with the chair has become rather sore and sitting still for any length of time is becoming problematical. Perhaps it is God’s way of saying to eat more cakes?

I sparked up my lap-top. Myfitnesspal dot com were again advocating sleeping in the nip. Morally they may well be lax. NHS jobs suggested I might like to work at St Thomas’s hospital in London. LinkedIn suggested I might pal up with all sorts of people with whom I have absolutely nothing in common.

As I drove to work the pundits on the radio were discussing how Paul Dacre was stepping down from his position as editor of the Daily Mail. They wheeled on journalists from the Daily Mail and the Guardian to offer opinions and whilst they didn't actually have a fist-fight live on-air, it came close.

There was also a lot of talk about how the Brexit secretary David Davis is at odds with the Prime Minister over all sorts of piddling details about the mechanics of Brexit. I'm getting fed up with hearing about Brexit on the radio now. Was it a good idea? Was it a bad idea? One thing is for sure - it is an idea that was never actually thought out.
Over the years I've had all sorts of crackpot schemes. Only two years ago I had this idea to take a professional secondment to St Helena for six months. A working holiday in a tropical paradise was a great idea... but five minutes of rational thought showed just what an impractical scheme it would have been. It's a bit like crowdfunding the Dover Citadel. It could be done, but not on the spur of the moment like I thought two days ago.
The nation has done exactly the same with Brexit...  Bung out all the foreigners, stick up Union Jacks everywhere all on the strength of “one world cup and two world wars” but who will run the hospitals, what about the Northern Ireland border, what about all the pan-European co-operative business ventures, and we’re still stuck with rules from Brussels but now we have no say in their creation whatsoever... Why don't we re-think *exactly* what we want out of leaving the European Union? Is having a plan *such* a radical suggestion?

I got to work where I had a dull day. Having some time owing me I skived out a little earlier than usual. I spent five minutes hunting out a geocache in Pembury only to find it laying in the middle of a footpath. I hid it where I was intending to look, then spent ages getting home. Why is it that drivers of *huge* lorries insist on driving along the A262 through Goudhurst when there are big signs up saying the road isn’t suitable for *huge* lorries?

Once home I took the dogs round the park and we had a ding-dong with a cyclist. There was a screech of brakes as he nearly ran over Treacle. Had he been on his side of the path… It’s not difficult, is it? There’s a great big picture of a bike painted on the bit bikes are supposed to go on.
Most cyclists are sensible, but the idiot minority is quite idiot enough to spoil it for everyone.

The dogs and I shared a chicken kebab (and chips) for our tea whilst watching stuff that the SkyPlus box had kindly recorded for me, then I got five gallons of beer going in readiness for a booze-up in a couple of months’ time.

I *really* should have an early night…