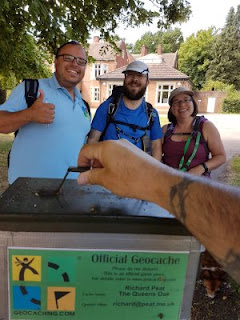 I woke feeling rather rough. This seems to happen more and more these days; I wonder why? Was it the three pints yesterday? I remember a conversation with a colleague about ten years ago when he said that when in his forties he could drink like a fish, but in his fifties he suffered after only a few drinkies. Certainly ten years ago I would think nothing of seeing off a gallon of ale; these days it is noticeably less.
Or perhaps it was too much sun yesterday and on Friday?

The plan for today had me loading the dogs into the car, driving to Tenyham to collect Matt, and then setting off to Berkshire. But what with the car being ill and Fudge having issues with trains, it was just me walking to the train station.
I got to the station to see the train pulling off. But I’d got there early, and the next train wasn’t far behind. As luck would have it, it suited Matt to pick me up at Barming station, and that is the station I will need for work tomorrow. So this morning was a practice run for work if nothing else. It was a practice run which worked well, and it wasn’t long before I was sitting in the MaattMoo-mobile on the way to Finchampstead.

There is an *incredibly* old geocache in Finchampstead. A few weeks ago Matt had asked on the “Geocaching in Kent” Facebook page if anyone fancied a trip to go find this one. Four of us met up today and we very soon had the thing in hand, My second-oldest geo-find (so far).
We then carried on along a wonderfully named series of local geocaches. The “Finchampstead Undulations” (FU) series followed a rather beautiful route. As we walked we saw a tiny little mouse and a deer; both of which I logged with my “mammals” app. And we saw *so many* red kites. What beautiful birds! They were following some agricultural machines which were harvesting crops; obviously hunting for the mice being chased out of the crops.
I took a few photos whilst we walked. The photos of the red kites really don’t do them justice.

Geocache-wise it was an odd walk really. The two old caches (which were the main targets for the day) were good caches. The route we then walked was in need of maintenance. The multi-caches on the route seemed to have been put out with start, waypoints and end-points all somewhat at random (which was strange as they were less than a month old), and there was one cache in blatant breach of the proximity rules.
But I was glad for the caches being there – they made for a good walk.

We had a crafty pint in the nearby pub, then made our way home. The M3 and M25 were busy; I didn’t doze off “too” much. And I also got a practice run on the train I shall take home from work tomorrow.
As we drove home the garage phoned. They’d had a look at the car. The parts alone will cost five hundred quid…