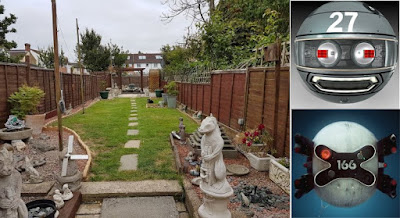 I woke with a headache at four o’clock. For some strange reason I thought that having a very early shave might help. So I had a shave just as dawn was breaking. Why on Earth did I think that having a shave would fix a headache? It is no surprise that the shave didn’t affect the headache in any way.
I went back to bed where I lay with a headache for a few hours before eventually getting up.

​Over brekkie I had a look at the Internet as I do. It was much the same as it always is.
Yesterday I’d suggested (on Facebook) a walk from home out to Bethersden for the beer festival. Having received absolutely no interest whatsoever I knocked that idea on the head. Instead I got the lawn mower out and spent a little while in the garden. I got the lawn sorted, then spent some time cutting back the over growth from “not-so-nice next door”. I also lifted some of the membranes under the gravel on that side of the garden and with a shovel cut the roots of the shrubs which are growing under the fence and coming up in my garden. I was tempted to put down some weed killer too, but thought better of the idea.
I then spent five minutes putting up my nice new net curtains in the shed. They look rather smart. All shed windows should have net curtains.

With "er indoors TM" off out for the day I got the leads on to the dogs and we drove out to Great Chart where one of my geocaches had gone missing. When you have a problematical geocache, it is never the ones on the roadside that are being troublesome. It is *always* the ones far from roads. But it made for a good dog-walk.
Eventually we got to where the cache was supposed to be. Sure enough it *had* gone missing. I replaced it. It was a shame that the last few people in the area couldn’t have done that for me. I carry a whole load of spares with me when I go hunting Tupperware, but for some inexplicable reason, being helpful really is frowned up on in geo-circles. Usually when we go for a major weekend walk I contact the person whose caches we are going to hunt out to ask if there are any issues we might sort for them, and generally I am met with bemused surprise. Some people even bluntly turn me down. Can you believe that doing repairs and maintenance on poggered geocaches without permission is a serious “no-no”? I *really* don’t understand this. Going out to replace a broken film pot under a rock costs time and money. Why wouldn’t anyone want someone else to do it for them?

We came home. I had a bite of lunch then set about painting up one or two bits in the garden. Last weekend when I tidied the shed I found several new paint brushes. Could I find them today? Eventually I found one and spent an hour painting sleepers and boxes before cutting back more stuff flowing over the fence from “not-so-nice next door”.
As I pruned Mrs “not-so-nice next door” walked up the garden and made a point of blanking me. Both dogs snarled at her. Good dogs!

After about five hours work in the garden I stopped and had a look at my efforts. For all that the garden was tidy, it *really* didn’t look like I’d spent five hours slaving away at it.
I *hate* gardening. Some people love it. For me it is just a chore.

With "er indoors TM" off out with her mates this evening I got Netflix to play me a movie. “Oblivion” used ideas which I’d seen in other sci-fi from “2001” to “Star Wars” (via “Planet of the Apes”, “BattleStar Galactica” and “Terrahawks”), but for all that, it was rather good. I’d recommend it, and for me that is high praise.

Being bored I then spent half an hour writing up CPD. I’m legally obliged to keep up to date with professional matters… sometimes I wonder if anyone else does it in the same way that I do. What some might call “plagiarism” I would call “collaboration”.
I shall put the kettle on in a minute… "er indoors TM" left cake…