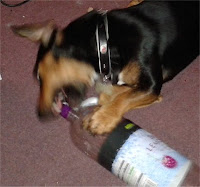 I had to make an unexpected excursion last night. My account with geocaching dot com is the cheapo-freebie one. If you pay them good money, the nice people at geocaching dot com will email you when new caches go live. And those with nothing better to do with their lives rush out of the house at all hours to be the first to find the new caches. Being FTF is a serious matter for some. One bloke in particular seems to be obsessed with the idea, having been FTF on most of my caches.
One of my caches went live late yesterday evening and this fellow posted last night that he couldn't find it. He's an experience cacher with over a thousand finds to his name and when he suggested that the normal people had found it and taken it I thought I'd better go have a look-see. So at 10pm I was acting very suspiciously by the bypass.
The cache was where I'd left it. I re-checked my GPS co-ordinated. It was odd. The actual co-ordinates were out by eight metres, but the GPS on my phone took me right to it. And from the hint I'd given he should have found it easily. Oh well. Others have now found it, which is the main thing.

I was up with the lark this morning. I can't sleep knowing that Fudge is downstairs and that he might be bored or lonely. So I went down and in doing so I woke him up: I could have slept longer.
I had the weekly weigh-in. The few pounds that went on over the summers camping are coming off. Too much beer, cheese and port I expect. And with no more ado we set off to the pub.

Today was the family reunion. "er indoors TM" had organised the bash this year. Bearing in mind the good experiences we'd had at the Park Gate Hotel in the past, and also bearing in mind the place's location we felt
that it would make the ideal venue.
If nothing else today served as an example of how fast pubs can change. With sour ale and a two hour wait for rather small portions of frankly average food (mine was dry bordering on burnt) I felt embarrassed to have suggested we used the place. We complained about the wait and was politely told that the problem was we ordered after other people; the implication being that if you order after mid-day you expect to wait for two hours. Still, it was good to catch up with the family; even if there was a rather disappointing turn-out. In the past there have been over fifty people along; today there were less than thirty.

Whilst in the area we did a couple of easy geocaches (it would be rude not to), and then we came home. We got home a lot later than expected (due to the delays at the pub), and by the time we'd collected catalogues from the masses it was rather late. Feeling rather worn out we turned down a couple of offers, and once I'd got the banana beer out of the bucket and into the barre we slobbed in front of the telly. Doctor Who was on. As a child I really liked that program. Now it's (at best) rather crap...