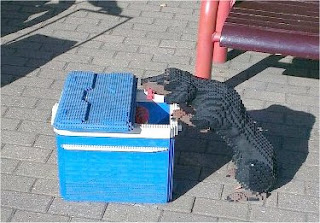 Following on from yesterday's witterings it transpired that "er indoors TM" had the flea comb in her bag all the time, so this morning after a spot of brekkie I got Fudge up on my lap and gave his fur a rake-through. He seemed to enjoy the process, and (fortunately) he turned out to be completely flea-free. Which in my experience seemed unusual. Previous dogs in my household have always had the odd flea when being combed. Perhaps the modern anti-flea preparations are better these days? It certainly makes me feel easier about giving "Mr Trousers" the full run of the house.
However this doesn't explain how I got so seriously bitten last weekend. Perhaps it was mosquitoes which got me. They have certainly done for me in the past.

I then set off to work slightly earlier than I might have - a new geocache had been launched and it was on my way to work. Or so I thought. Whilst I got within fifty metres of the thing, it was behind a row of houses on another footpath. I shall have to plan my route a bit better before I try for that one again. Or look at the map properly.

As I drove to work there was an article or two on the radio which got some steam from that most volatile of my bodily fluids. Apparently a candidate for the American presidential elections is looking down his nose at the sort of person who expects the state to provide homes, healthcare and welfare provision. Call me an old leftie if you will, but if the State doesn't provide homes, healthcare and welfare provision for those that need them, why on Earth do we bother having a State or a civilised society?
And talking of welfare provisions, there was an interesting statistic announced on the same radio programme. The claim was made that the average Danish chap who is in all ways identical to a simular British chap can expect a fifty per cent better return on his pension investments. That wound me up - clearly there's something going seriously wrong somewhere!
Or so I thought.

When I went on-line to look further into this I could find absolutely nothing to corroborate what I'd heard on the radio; but I did find that this average Danish chap won't get his pension until four years after the comparable British chap will get his.
The moral of the story is that I really shouldn't believe what I hear in the news. Another example of this is given by the current campaign by St John's Ambulance brigade to raise the profile of first aid in the general public. A couple of days ago they made a very emotive claim on peak time television that if the public were more aware of basic first aid them 140 000 lives could be saved each year. However there is a school of thought that they have their figures wrong by a factor of nearly thirty. Who is right -St Johns or fullfact.org? How can we ever know who we should believe?
Personally I have grave reservations about the entire concept of first-aiders, but that's another rant...

Meanwhile Fudge would seem to have a look-alike at Legoland