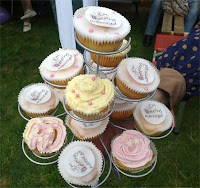 I ached this morning. For someone who prides himself on leading an active an active outdoor life, just lately I seem to be suffering after a decent long walk these days. I never used to feel this. Perhaps I'm getting old?
I had the weekly weigh-in. My weight seems to be holding constant. It could do with going down some more. Perhaps I should try to be better at recording what I'm eating on myfitnesspal dot com? I then spent a little while getting laundry washed over a spot of brekkie. A dull job, but one which needed doing.

With my smalls airing on the line we set off to retrieve the catalogues I'd distributed to the masses on Thursday. I'm not sure the masses were grateful; but the masses rarely are. We then went round to South Willesborough so's "er indoors TM" could have a go at one of the town's better geocaches. I won't say much about this one; other than it is quite tricky to do, and I have suspected shenanigans in the past.

And then round to the Fudgery for an engagement party. The families gathered as did loads of friends; a gallon of ale was downed; a good time was had by all. And two geocaches got done into the bargain....
Posted by Manky Badger at 9:14 pm