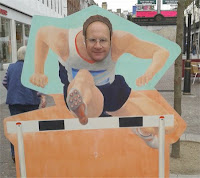 The workshy layabouts came to collect our recycling today. I suspect that " workshy layabouts" isn't their official job title, but they boiled my piss. In the past we've had problems because if we don't leave the recycling almost (but not quite) on the pavement they won't take it. I have had words with the man at the council who admitted that they are too lazy to walk two paces extra to collect the bin. The same official at the council urged me not to make my grumble into a formal complaint because he was really loathe to upset the workshy layabouts.
This morning we'd put the recycling bin where they wanted it; in a position where they wouldn't have to take an extra step out of their way to get it. But once they'd collected the bin they dropped it where it fell. It was as well I saw the bin otherwise I doubt we'd ever have got the thing back again. I really should moan to the council; but the officials at the council have told me that they are too scared to complain to the contractors.

The plan for the morning was a trip to Folkestone so bearing in mind yesterday's fiasco I thought I'd better check the travel news. It was as well that I wasn't working today - there was another major hold-up on the A28 that I would have got embroiled in.
And so to Folkestone. I met up with Hosey and we spent a very pleasant couple of hours wandering here and there, up hills and down dales. Into the town centre and out again. Along the Leas, and then back to Hosey-World for coffee. Whilst there Hosey gave me some pointers for fine-tuning the settings on my sexy new phone. I now have an app that allows me to control all the geocaching apps from one screen. that will save a load of farting about in future.

I came home and collected the furry one, and we went for a little stroll to check my series of five local geocaches. It was as well that I did; one of them had gone missing. I shall have to replace that over the next few days. It will be interesting to see how long these caches last before they get "muggled".
I spent the rest of the afternoon watching telly with Fudge sitting (sleeping) on my lap, and then with the tribes gathered we set off to Hawkinge for a charity quiz night. A fun evening with friends, but if I had been running the event I would have got on with it with a little more alacrity...