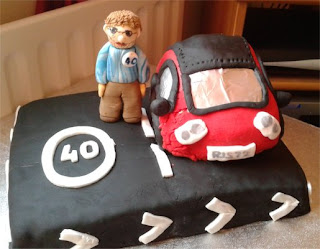 I did my weekly weigh-in this morning. My weight remains constant at just under fourteen stone. It's been that for a couple of months now. I wish it would go down some more. I did a quick on-line survey over brekkie and then Steve arrived. We collected the Stanhopians and set off to Tunbridge Wells. Today was a special birthday and the pressie had been left several miles away. Woops!

Se soon collected the pressies, and spent an entertaining five minutes playing with the gift wrap dispenser in Toys R Us before making our way home. It took us fifty minutes to get to Tunbridge Wells and four hours to get home. But we did come home the very scenic way via Pembury hospital, Lamberhurst and twelve geocaches. There were some beautiful views on the way, and I found my three hundredth cache.

Once home we had a quick change just before everyone arrived, and the we all went (mob-handed) 5o the birthday party. I'd made up a barrel of citrus home brew for the occasion and had been looking forward to see how it turned out. I was pleasantly surprised by the stuff; which was probably rather stronger than I was expecting.
The rest of the day was all rather vague...