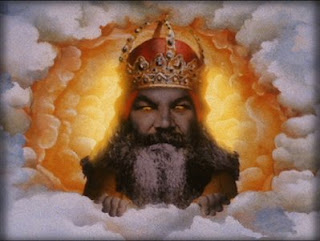 Last Thursday I left home a little early to look for the geocache that "er indoors TM" had hidden near Eastwell. I didn't get to it then as I got stuck in the most horrendous traffic jam. Today I had another try at finding the thing before work, and again didn't succeed. It didn't help that my phone app first failed to actually locate that particular cache. And when it finally did locate the cache I had to drive through quite a serious flood and park in a swamp. I eventually got to with a few metres of the thing, but I didn't have wellies. The mud and deep puddles and the lack of time made me think that giving up might have been the best idea for the day. So I gave up. I'll try again another time.

Surprisingly I wasn't late for work. I thought I would be when I found myself driving for ten miles stuck behind a coach which was travelling at thirty-five miles per hour in a fifty miles per hour zone. As I drove there was something on the radio which promised to be quite interesting. Apparently theological thinking has proved the existence of a supreme being/creator/God by the application of basic intelligence.
I'd heard all the old arguments before; intelligent design, "I think therefore I am therefore God created me", absolute convictions, being threatened with eternal damnation, over the years I've heard all the old chestnuts. Today's radio program claimed to use logic; personally I felt it was using gibberish. The arguments went something along the lines of claiming that God (or the definition of God that they were employing) is the most supremely wonderful and perfect thing that there can possibly be. Absolutely anything that anyone can suggest as being wonderful and perfect isn't as wonderful and perfect as a slightly more wonderful and perfect thing, therefore a supreme being/creator/God is the most wonderful and perfect thing there is.
I couldn't quite grasp the sense in that, but as a clinching argument the speaker said that it is an indisputable fact that anything that one can think of is real. He could think of a supreme being/creator/God, therefore this (up till now) hypothetical supreme being/creator/God exists. Again the logic escaped me. I can imagine doing rather unspeakable things to various TV celebrities of my infatuation. Does that mean that I am actually going to get my wicked way with them in reality? I don't think so.

And today is a birthday. Google has been going for fourteen years. And what an impact it has made in that time. Could you imagine a world without Google? Or any of our amazing high-tech lifestyle? Talking of which I then heard something which made my piss boil. A colleague whose mobile phone comes from the same provider as mine asked me how much of a discount I get each month. I get nothing. She gets twenty five percent off the bill every month because she works in a hospital. She suggested that I phoned the mobile company and asked for the same discount. I phoned them. They didn't actually tell me to get knotted, but that was the gist of their message.
Any discounts they might give are applied at the time the phone is bought; and they don't like to make people aware of any discounts that they might be offering. I told them that I would bear that in mind when the contract is up for renewal. The woman at the other end of the line said that I should do that.
I had to spell it out to her that I wouldn't be renewing...