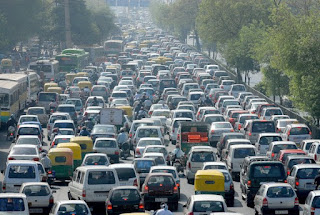 Here's a story of our times. A mother found out about the death of her daughter through Facebook. It's amazing how social networking is becoming the way that news travels. Personally I can't help but feel that next of kin should be informed about the deaths of their children before the authorities are dumb enough to give it to the sort of person who would go on to make such a tactless post but what do I know?

Over a spot of brekkie I checked my emails. I saw that a new geocache had gone live; one that would only be five minutes out of my way on my journey to work. So I left home half an hour early thinking I'd find this cache and not be late to work. Normally it takes me between five and ten minutes to get to Kennington (the part of town where the cache was hidden). Today the traffic was awful, and it took over an hour to get that far. I found myself embroiled in two different hold-ups; both of which had been listed as "very severe" on the BBC's travel website. Needless to say I abandoned all plans to go caching and I just carried on to work. As I drove along the A28 the traffic was queued back five miles out of Ashford as far back as the Wye crossroads.

I've since found out that the delays were due to a serious accident in which four lorries somehow scrunched each other on the motorway. I suppose I shouldn't really complain. After all, spare a thought for the poor people who were involved in the smash-up. I've now been doing the Ashford to Canterbury journey for over a year and this is only the second time that there has been any serious delay.
But I can't help but feel a bit miffed that this had to happen today. In geocaching circles there is great kudos attached to being the first person to find a cache when it goes live, and today had there not been the traffic problems I might just have been that FTF (first to find) ! Mind you I got to be FTF with "er indoors TM" 's latest trackable; she's had Fudge made trackable. Fudge seems unfazed by the development.

Yesterday I mentioned that I was out and was following the train line along which nuclear stuff is transported to and from the power station at Dungeness. The news today told that the local council have voted against having a nuclear waste storage facility built on the site of that soon to be decommissioned power station. My gut reaction is that I wouldn't want a nuclear waste storage depot in my back yard either. But having said that I quite like running all my electrical appliances on the leccie that comes out of the nuclear power station; and nuclear waste is part of what goes with the whole nuclear package. If we do away with nuclear power what realistic alternative is there?