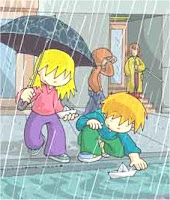 Yesterday I thought I was sickening for a cold. Today I woke feeling not so sure. Yesterday I had a proper croak and sniffle, today it was just a mild headache. Mind you we have now turned on the central heating; it's suddenly got very cold.

After a quick bit of brekkie me and furry Fido set out on a mission to collect those catalogues we didn't get yesterday. Seven to collect; we got two. We were out for a couple of hours and only just beat the rain. Within five minutes of getting home the rain came down torrentially. So with nothing else to do I did the household accounts. They could be worse; I shouldn't grumble.

I then apologised to one of the normal people. Yesterday I made a light-hearted off the cuff remark on a geocaching site about Fudge tiddling on a geocache. Most people would take the comment with the smile that was intented. One bloke didn't; he went off on a rather prima-donna type tirade. Which is entirely the problem with the written word; it is so easy to inadvertently give offence. But the chap seems to have calmed down now, which is probably for the best.
What is it with hobbies and the Internet? When I kept snakes, the on-line reptile forums are little more than one big cyber-fight. The kiting forums get quite bitter at times. Why can't people discuss their hobbies and interests without falling out? Or is it just me?

I had hoped to do something with the day, but a combination of a lack of partners in crime and terrible weather left me home alone. And so with Fudge parked on my lap (fast asleep) I spent a few hours watching "Auf Weidershen Pet" DVDs until the phone rang. "My Boy TM" was wondering if it was me that had put a whole load of dog dung bags through his letterbox. It wasn't. I wonder who it was.

As the afternoon wore on so the rain wore off, and me and Fudge went for another little walk. On Friday I found that one of my geocaches had gone, so we replaced it. We came back via Pets at Home where I had intended to get some clippers to trim Fudge's claws. They didn't have small clippers, and to express his dissatisfaction Fudge tiddled up their displays. Fortunately the nice lady in Pets at Home was used to tiddling dogs and soon cleared up the mess. And to add insult to injury as we were walking out a small child patted Fudge and loudly announced that "that little doggie looks like a cat". Needless to say it will be a little while before I dare show my face in Pets at Home again.
On the way home I thought I'd check on another of my geocaches. That one was gone, so I've disabled the listing and ordered a replacement from eBay. Hopefully it will be here in a few days.

The phone rang. It was Adelina phoning all the way from Italy who was attempting to sell a bargain package of olive oil, tagliatelli, linguini, jams, marmalades, pestos and all sorts of foods which were low cholesterol, low sodium, and all were with (apparently) no calories at all. I tried to get a word in, but she wouldn't stop gabbling so I heard her out. When she finally stopped speaking she seemed amazed that I didn't want to buy her bargain package. The fact was that I quite liked the sound of it, but eighty quid for what was effectively a glorified pic-nic seemed a bit steep to me....