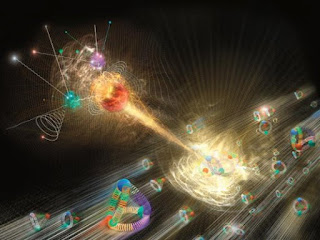 I only woke half an hour before I needed to get up this morning; which was a result. I went downstairs to find the pestilential pup loose in the living room. Again we'd not secured the dog-proofing (baby gate) in the kitchen and he'd managed to push it open. He was fast asleep on the sofa, and seemed pleased to see me. I would like to have stayed home with him and taken him for a mega-walk, and that had been the original plan for the day, but unforseen circumstances put paid to that idea.
A few weeks ago I blogged about whether I wanted a dog or not. At the time I was dead against having one. And now that he seems to be with us more than he's not I'm still unconvinced about having a dog.... It's not that I dislike him. Far from it. In fact I have got too attached to him; which is entirely why I didn't want a dog in the house in the first place.
Brekkie, and then I wrapped up warm and set off to work. Leaving at 6.45am makes for an early start, and an increasingly dark and cold start too. It won't be long before there is ice on the car in the morning. Which reminds me that I also need to think about shutting the Koi pond down for the winter.
As  was driving past Morrisonson the way to work I got some petrol. That's not as cheap as once it was.
I did my bit, and got to leave a little early: it was astro club - I like to get there early to set up; especially on nights like tonight when I was in charge of getting the key for the hall. Whilst setting up one of the idiot parish councillors made a point of loudly shouting to his cronies not to park near the village hall because "the astrology lot park too close". After every shout he would look through the window at me to see what reaction he would get. After fifteen minutes of this I went out and loudly asked him why he'd brought his car along when he only lived a couple of hundred yards up the road. He didn't like that.
The main topic of the evening was the recent discovery of the Higgs boson. The talk was very interesting - a good refresher of some chemistry and physics, and then a clarification of sub-atomic structure All illustrated by the younger members of the club, fizzes and bangs, and choccie biccies. Contrary to popular belief it turned out that the Higgs boson hadn't been down the back of the sofa all along.
It was a shame that I'd left the raffle tickets at home, but such a piddling detail didn't stop me running a raffle...