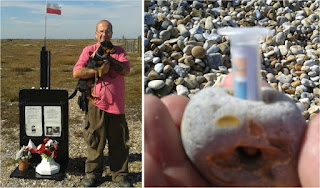 I woke at 3am bursting for a tiddle; but did not dare go for fear of disturbing the pup. After a couple of hours I could hold it no more, so went downstairs to do my thing; expecting to then have a dog who was raring to go. Fudge was fast asleep, and didn't stir at all.

Back to bed for a couple of hours, then after a bit of brekkie I distributed catalogues of bargains to the masses. Whilst I was at it I nearly got run over twice. Why don't cyclists use the road? Why do they go up pavements? All the serious injuries to cyclists I've heard of have happened when cyclists are on pavements.

Home to collect the pestilential pup; and we went for a short stroll. Over the last few weeks I've put out five geocaches along an easy route for me to walk the dog along, so I thought I'd check up to see if the caches were OK. It was as well that I did. One had been left in the open air by the last finder. The chap had made no effort to hide the thing. And one was entirely missing. It was as well I'd brought along a replacement cache just in case.
Back home again to whinge to the world via Facebook about my trashed caches, and then to waste an hour doing the ironing. A tedious job, but one that needed doing.

Steve cane round, and then once we'd collected Earle we went on a drive down to the Romney Marsh. Dymchurch, Snargate, New Romney, Snave. Ice creams on the beach. We had a really good afternoon, and did twenty geocaches and three geo-challenges whilst we were at it. Today I found my two hundredth geocache. I took Fudge with us. There's no denying I was dubious about taking him, but I was glad that I did. He seemed to like the outing, and he was as good as gold.
It was amazing how quickly the afternoon went. All too soon it was getting cold as the sun was setting, and it was time to go home.

A quick cuppa and we said our goodbyes. And just as we finished out tea the doorbell rang. Some of the younger members of the astro club had found the geocache in my garden and thought they'd say hello whilst they were passing. It was good to see them, and good to know I'd made more converts...