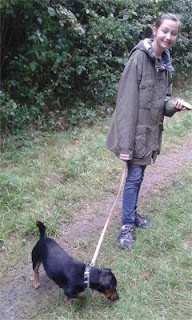 I woke feeling rather rough this morning. It's possible I have picked up one of the colds that are going around. It's also possible that far too much home-brew last night might have been taking its toll. And "Mr Trousers" didn't help by waking me with a barking fit at 4am. I didn't get back to sleep after that, and lay awake until finally shifting my carcass shortly after 7am. I came downstairs to find Fudge was fast asleep.

A quick bit of brekkie and we set off to Trosley. Or that is how it is pronounced. It's actually written "Trottiscliffe", What's that all about? The weather forecast wasn't good, but eight hardy souls (and one small dog) had decided to do the "Trotticliffe Trail"; a series of twenty seven geocaches. And we had a good time. Across fields,up hills and down dales. However as the morning wore on so the rain started spitting. And the temperature dropped. And the rain got harder; eventually it became torrential. By the time we found the last cache hidden under a lump of flint (that was something of a theme to the trail) we were all soaked to the skin, and Fudge was shivering.
We had originally planned to have lunch at this point and go on to do the Birling loop - another series of caches. But we were all soaked, so we decided to call it a day and come home. We'd decided to miss the planned kiting event at Capstone Park today, and judging by the comments we read on the Internet it seems as though it was as well that we didn't go - people flew kites regardless of the weather, but they got drenched.

Once home it was hot showers all round (including one for the pestilential pup), and with the rain having slackened off to a medium monsoon we went out to collect catalogues from the masses. And we got cold again.
And then disaster. My laptop wouldn't recognise my phone at all. I rebooted the computer no no avail. I searched Google. I rebooted the laptop again. I got cross. I nearly cried. And then I rebooted the phone and all was well. And having wasted an hour I then got to grips with pocket queries and .gpx files, which was easier said than done...