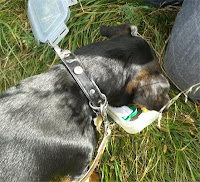 I was hoping to have a lie-in this morning but the local cats were pulling faces at Fudge through the kitchen window at 7am, which started him woofing. So I got up and made a start on laundry. Dull, but it needed doing. Whilst the laundry cooked I brekkied, and did an on-line survey. It was a noisy brekkie - Fudge doesn't destroy plastic pop bottles quietly.

With brekkie scoffed I spent a little while in the garden gathering dung and mowing the lawn. And with the garden tidied I made a start tidying up some of my bits and bobs. I found an entire bag of Koi food I had no idea that I had. That was a result. And then the doorbell rang. The undercrackers I ordered from eBay had arrived. So I thought I'd try a pair out. They are a tad snug, but they will do. It turns out that they are Calvin Klein, so I suspect that the first fruit of my loin might try to make off with them.

Steve arrived, and we set off to take Fudge for a walk. Through Willesborough to Sevington, and then past Quest and Batchelors and home via the rugby club. A round trip of four hours and about ten miles. And eight geocaches on the way. There was a dodgy five minutes when Fudge gave one of the geocaches an experimental chew. He didn't actually eat it, but I'm not sure that the intention wasn't there.

Home; where I was expecting Fudge to be rather tired after his extensive walk. He didn't sleep. Instead he continued destroying plastic pop bottles. He seems to like doing that. I wish he would do it quietly. He might not be tired after the walk but I certainly am...