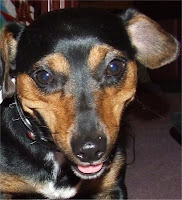 I woke today with just the slightest feeling of envy. My brother and my cousin are on their way to the Arctic circle for a weeks deep sea fishing. Whilst in fishing (as with life in general) nothing is entirely predictable, it's not unlikely that they will hook several fish which will be over one hundred pounds in weight.
Whilst I like fishing I can't help but feel that I'd get bored with a week of it. And there's no denying that I'm not the world's best sailor. But I wouldn't mind a week's holiday in the Arctic circle.

Being on a slightly later start than usual I stopped off at the farm shop on the way to work this morning. A few months ago I was singing the praises of the farm shop. Today I was rather disappointed with them. For all that it is cheap, their fruit and veg isn't what it once was. The carrots today were frankly manky.
Talking of fruit, I got some decent apples from a market stall the other day. They were good, but quite expensive. And then I noticed that they all had the "Sainsbury's" label on them. The cheeky fellow had got them from the supermarket and upped the prices. It's a sad reflection of my life that I am au fait with the relative prices of vegetables (!)
I also stopped off in Godmersham on the way to work. Last week Jose gave me a ready-made geocache and this morning I hid it in.... I won't say where; I'll let those of my loyal readers who like that sort of thing find it for themselves. You'll know it's my one. There's precious few geocaches in the part of the world where I've hidden it. I know that fellow cachers have had problems trying to hide caches only to find there's already another within the minimum distance of 160 metres. I don't think there's another geocache within a mile of the one I hid this morning.
A late start made for a late finish. Too late to go to the Tuesday gathering of the clans. A shame - I missed meeting up with my mates. I also missed seeing "Being Human"; I do have the episode on the Sky Plus box. I will watch it over the next few days. In the company of Fudge, who is staying with us for a few days. It's our turn with him for the dog-share. he was waiting for me when I came home this evening. He's slowly getting the concept of "sit"; bless him.
The day's news boiled my piss. The Prime Minister has had a cabinet reshuffle. A phrase which (amazingly) seems meaningless to so many people. Effectively he's replaced the bosses of a sizeable proportion of the public sector's infrastructure. Which is his prerogative. But it's a daft thing to do. It takes anyone some time to get to grips with a job. With Ministers of State finally getting a handle on what they are supposed to be doing, is swapping them all about a good thing to do?
Personally I don't like the idea of appointing a new Secretary for Health. There have been so many changes in the NHS over the last fifty years that all the NHS can now well do is to implement new policy. And as soon as that new policy is implemented, abandon it for something else. Surely the NHS only needs one set of meaningless paperwork that it can fiddle about with in the background whilst it gets on with the business of providing healthcare.
And the same can be said for schools, universities and the armed forces too...