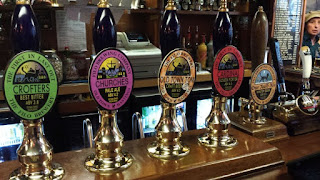 I finally saw red with my little dog last night. After an hour of him trying to push me out of the pet I forcibly relocated him to his basket. I then slept like a log only to have him sulking at brekkie time.

Over brekkie I suddenly found myself to be "Mr Popular" on social media. On one of the many groups I follow someone had posted one of those links in which there is a You-Tube video embedded into a ton of adverts. I suggested they might get a lot more hits if they didn't post the spamming websites. For once people seemed to agree with me; it was nice not being in a minority of one (if only for a few moments).
Spoilers for the new Star Wars film abounded on-line too. Much as it would have been nice to have seen the film *without* knowing what is going to happen, I'm not really that fussed. Mind you I can remember an incident some time ago when someone who was mouthing off about the latest Harry Potter film the day after it came out. I deliberately went to the bookshop for the midnight release of the next Harry Potter book and stayed up all night. Next morning at 8am I told him *ALL* about it. I shall go see the next Star Wars film on the very first showing after its release. I have a list of people I shall go visit immediately afterwards.
There were also quite a few tributes to Lemmy from Motorhead (who died recently) to be found on Facebook. It never fails to amaze me how no one is ever appreciated in life, but once dead the tributes flow like water.

I then took the dogs for a walk. "Furry Face TM" was raring to go; Sid ran and hid by the sofa and had to be forced into his harness. We went for a rather shortened walk; today I realised something. I like going for walks with my dog, but with Sid along the walk becomes a chore. He doesn't walk, he plods. When off the lead he trails behind. When on the lead he has to be (almost) dragged.

Jimbo arrived and we went to the Gorge for a spot of brekkie. You can't go wrong with a fry-up. And once fryed-up we wandered down to the railway station where we met up with Steve Sarah and Jason. WIth tickets bought we took the train to Hastings and scoffed home made mince pies as we went.
After a short walk we were at an old favourite; the FILO. With six of their own ales on the hand pumps we were settled for the afternoon. My old mate Kev came to find us, and the time flew by. The afternoon was something of a haze, and all too soon it was time to go home. Pausing only briefly for a pint of the Christmas Ale in the George and a spot of McDinner we were soon snoring on the train home.

It was a shame it was raining on the walk home, but you can't have everything. Once home I posted some photos on-line.
I shall have a headache in the morning...