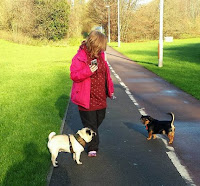 I found myself wide awake in the night so got up and spent half an hour watching the 4am "South Park" on the Comedy Central channel. Getting up and watching telly seemed to work; I went back to bed and slept through til 8.30am.
Sid spent the night on the bedroom floor for the second night, and for the second night there were no turds. Perhaps it is an attention-seeking thing?

Over brekkie I struggled with a geo-puzzle. I was pretty sure I had the right idea in that my calculations put the thing in the UK. However I was pretty sure it should be somewhere in the general area of the Kent-Sussex border but I calculated it to be miles away from there. So I utilised a "non-standard" way of solving the puzzzle; I asked for help.
I also read an article which made me sigh. A space rock thingy flew past the Earth last night. This was presented as news. It really does happen all the time. Go outdoors on any clear dark night and look up. after a few minutes you will probably see a shooting star. You will see several in an hour. After a while they will seem commonplace to you. These are all from space rocks burning up in the atmosphere. These aren't news. But it amazes me that the general public really do see them as news.

We put the leads on the dogs and took them for a walk. Last night I collected "er indoors TM" from the Spearpoint and we left her car there. Today we walked back to collect it. Yesterday's dog walk was cut short because of the terrible weather; it was glorious today. The weather was sunny and mild. Sid rolled in fox poo; Fudge tried to hump him. I even took a few photos as we walked.

It took an hour and a half to get to the Spearpoint; getting home was hard work. The roads were *really* busy. Everyone seemed to be off for the Christmas break. We got home just as the delivery chap was arriving with a consignment of candles; that was well-timed.

Pausing only briefly to hose the fox poo off of Sid we had a spot of cheese on toast for lunch. I had an email - a message about that troublesome geo-puzzle from the chap who'd set the puzzle. I was thinking along the right lines but hadn't allowed for zeros. i have now, and in the New Year I shall go find this one.

Feeling rather smug I took myself off to bed for the afternoon. After two hours I was wide awake. If only we could sleep for extended periods at times when it was convenient to do so...