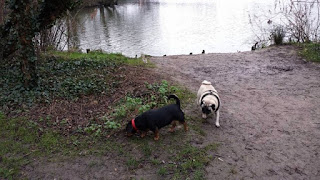 Both dogs sneaked upstairs last night. I can (just about) cope with "Furry Face TM" taking up all the space on the bed taht "er indoors TM" allows me, but Sid's snoring was just too much. I took them both downstairs and after a a quick trip to the garden I settled them in their baskets. Within half an hour I was taking them back downstairs again...

Over brekkie I checked out the Internet; other than Dick Van Dyke having had his ninetieth birthday little had changed overnight.
I put the lead onto a bouncing "Furry Face TM" and "er indoors TM" coaxed the lead onto a rather disinterested Sid, and I took both dogs for a walk. As we walked neither dog was paying much attention to the other, and there was an embarrassing incident when Fudge stopped and Sid bulldozed right into him.
We carried on to Singleton Lake and round to Viccie Park where Fudge made a nuisance of himself with some old friends. Sid was noticed only for the fact of how he was straggling. Sid was odd; when on the lead he was by my side all the time. When off the lead he seemed to fall further and further back.

Once home both dogs immediately settled and Sid (in particular) was soon snoring. I spent a few minutes fighting with Christmas wrapping paper then put some stuff into the washing machine. Since the nice man fixed the program timer, the washing machine seems to take much longer to scrub stuff.

I then took the rubbish from last Friday's astro club meeting to the tip, delievered a vaccum cleaner to "Daddies Little Angel TM" and went on to the hospital for an appointment about that troublesome lump in my neck.
To cut a very long and tedious story short I'm being sent back for yet another urgent ultrasound-guided biopsy at some point.

I came home, scoffed a bit of lunch then took myself off to bed for the afternoon. I slept for a couple of hours and dozed fitfully for a little while after that.
I came downstairs and watched "Upstairs Downstairs". Sid seems to have taken a dislike to Her Ladyship. I must admit I have too; whilst the Master is away fighting in the war she is having it away with a junior officer from Yorkshire.