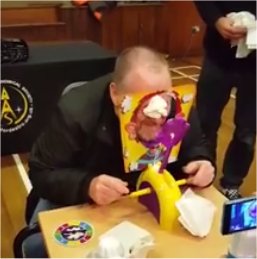 I got up this morning and spent a few minutes clearing up Sid's turds. As I did so, Fudge watched from his basket with a most odd expression. I could tell that he knew it was wrong. Sid however seemed oblivious to his misdemeanours.
Over brekkie I found myself enthralled by the Christmas episode of "George and Mildred" on ITV3. Did people *really* enjoy this sort of drivel?

I set off to several streets away to find where I'd parked my car last night. As I walked the dustbin-men were doing their thing. For once they weren't noisily making a mess whilst scattering emptied bins all over the pavements. And they were being civil to passers-by. Obviously they were after something. Do people still give bin-men a Christmas tip?
I got my car and drove it home where I unloaded the baby seat and put the box of my stuff back into the boot. As I did that the fox I saw yesterday walked down the pavement. As he passed me he glanced up in the same way that I would nod at a passing acquaintance.
I spent a few minutes watching Foxy. That animal is completely fearless.

I drove to work; as I drove the radio spewed its usual brand of drivel. I stopped off at Morrisons as we'd run out of jam. It was a shame that I didn't realise I'd left my packed lunch at home as I could have bought some sandwiches there. I didn't realise that until I actually got to work.
The League of Friends shop sells sandwiches but I don't like encouraging that sort of thing. I got some coronation chicken sandwiches from them. They weren't too shabby (to quote "My Boy TM" ) but I wouldn't tell them that.

After work I set off to McDonalds. Usually before astro club we go to the McD in Eureka Park, but today we went to the one on the Orbital Park. If nothing else it made for a change. I had the chicken strips, or as I prefer to think of it, McKFC.

And so on to Astro Club. Over a year ago the committee had actually arranged for the December meeting to be next Friday, but it seemed that only some of the committee could make that date. So we met tonight instead. The meeting was billed as a "social". Generally I read any club's "social" as "we've not actually arranged anything" and I went along with rather low expectations. But I was wrong. Despite a rather disappointingly low turn-out we had a great time.
Especially with the custard pie throwing machine intended for five year olds. Must get one for myself.
Chess-Boxing and custard pies for Christmas...