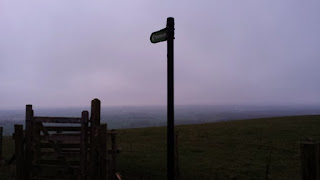 I diidn't sleep well; I was too over-excited about our victory in the vegetable nativity competitiion. I finally gave up tryig to sleep shortly after 5.30am and had a look at today's offering from my lego advent calendar. For some inexplicable reason the song "The Rainbow Connection" (by Kermit the Frog) seemed to be stuck in my head.
Despite being over fifty years old (and being a grandfather) maturity sometimes eludes me.

Over brekkie (shared with a still-smelly dog) I watched this week's episode of "After Hours". After five episodes I have finally realsied that the show is set in Lincolnshire and not on the Isle of Wight.

I took a rather circuitous route to work today. Being a "geo-calendar day" I needed to log one geo-find today so I drove out to Hastingleigh where I made rather hard work of finding a little magnet stuck inside a metal gate.
The location of this hide seemed very familiar; I'm sure I've geo-hunted there before.

As I drove the talk on the radio was all about Parliament's decision to start bombing Syria. Will bombing Syria actually affect the terrorists that the bombing is supposed to target? I can't help but feel that there will be a lot of innocents caught up in the violence and that anyone who should actually be bombed will be nowhere near the target zones. Those being interviewed on the radio suggessted that a large factor in the decision was that britain's bombing would help the Prime Minister's political posturing on the global stage.

There was also a lot of talk about how many MPs have felt they have been bullied recently in order to sway their vote for or against the bombing.
Jeremy Corby has said that he won't stand for bullying in the Labour party. Within reason he has a point, but... I blame society (and the schools).
Fewer and fewer people these days are able to actually form a coherent argument or can disagree without deliberately causing offence which can be misconstrued. And more and more it seems to me that what one person sees as a heartfelt argument about a deeply felt conviction is so often seen as bullying by another person who is unwilling to see any point of view other than their own.

I got to work and after the recent excitement of the vegetable nativity, today was rather dull. Busy, but dull.
Once home I took "Furry Face TM" round the block. As we walked I heard the distinctive sound of chicken bones being crunched. Someone had dropped KFC bones and he had them. Twice.

Seeing how he'd had KFC it was only fair we had the same...