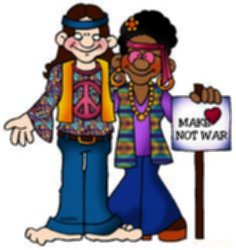 I got up at 2am and chased both dogs into the garden whether they liked it or not. (As a matter of fact one did and one didn't) I was therefore not impressed to get up at 6am to find a turd waiting for me just outside the bathroom door. I suspect that was from the dog that didn't like it at 2am.

I had a spot of brekkie and had a look on-line. My piss boiled over Facebook... Something which annoys me is how history repeats itself.
About fifty years ago hippies sprang up and became somewhat notorious for slobbing about whilst dressed stupidly, stoned out of their tiny minds blathering platitudes about peace and love whilst (for many) making themselves patently unemployable. Presumably with this in mind, my nephew has modelled himself on Coco the Clown and spends much of his time stoned out of his tiny mind blathering platitudes about peace and love all over Facebook... having dyed his hair bright green and pierced his right ear with a lump of plastic so large as to make him instantly undesirable to any potential employer. (I've nagged him about this so many times!)

I agree entirely that the world *would* be a better place if everyone stopped fighting and killing and hating each other. However the hippie philosophy doesn't seem to offer a practical alternative.
I can't help but think that if those who are so vocally advocating slobbing about stoned out of their tiny minds (whilst blathering platitudes about peace and love all over Facebook) actually paid their way (and didn't expect subsidies from my taxes) then the world might actually be a better place.
Have you ever noticed that you rarely see hippies going to work at all; let alone before 7am on a Sunday morning?

I set off to work. It was dark when I left home; after all in two days time it is the shortest day of the year. Mind you it was warm; according to my car's dashboard it was eleven degrees at 6.45am. I've only had to scrape ice off of my car once this year.

As I walked to my car I met a chap walking toward the town. I say "walking" - he was staggering all over the pavement taking three or four steps from side to side for every step forward. He was wearing a (rather crumpled) fine suit, but his tie was knotted under his right ear, he had tinsel round his neck and a carnation behind his right ear. He attempted to exchange pleasentries with me, but speech was far beyond him.
He seemed happy. Perhaps he was a posh hippy?

As I drove to work I listened to the radio. In stark contrast to my nephew's wittering about love and peace, the Prime Minister is to review the use of guns by British police.
It transpires that British police are rather reticent to use firearms because fears of lengthy investigations, public inquiries and even prosecutions following a shooting deter police form wanting to take pot shots.
There is no easy answer. On the one hand the police should be able to shoot gun-wielding terrorists dead on the spot without a second thought. On the other hand in such situations it is not clear until after the event what was actually going on.
I'm glad I don't have to make such decisions. It is much easier to pontificate from a distance.
I got to work just as dawn was breaking and had another busy day.