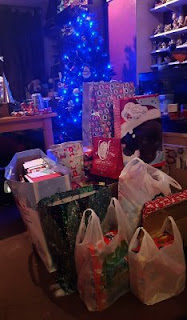 Christmas Eve is an odd night at work. Some years it can be busy, other years quiet. But there is no denying that I was expecting the overnight radio to have been somewhat more festive than it was. With documentaries about the physicist Faraday and the New Horizons probe to Pluto and articles about the German economy and adoption it didn't seem at all Christmassy.

And so I set off homewards. What with a few days leave having been booked, Bank Holidays, scheduled biopsies and the vagaries of my shifts I've only got three working days over the next two weeks.
As I drove home I listened to Nicholas Parsosns doing a festive "Just a Minute" on the radio. That started getting me in the Christmas mood.

I arrived home feeling rather festive; the house smelled of roasting Christmas dinner. But as well as feeling festive I felt tired so I went to bed until mid day.
I got up and found "Daddies Little Angel TM" and her crew had arrived. And it wasn't long before the "My Boy TM" posse were here either. Pausing only briefly to surgically deal with Cheryl's blister we were soon in full Christmas flow. Pressies were dished out. I was pleasantly surprised with the barrel of stout that I'd brewed. seven of us (and "Stormageddon - Bringer of Destruction TM") sat down for Christmas dinner. "er indoors TM" had excelled herself; we had a really good scoff.
Feeling pleasently bloated I took Lacey to the shop over the road for loads of squirty cream and we had a quick game of "Pie Face" before I sat down on the sofa to rest my eyes.

I woke to find that James and Emily had arrived and we scoffed meat and pickles whilst playing "Who's in the Bag"; a rather good game which does pre-suppose you have heard of a lot of celebrities and historical figures.
By the time the evening came the crowds had thinned somewhat. I got out the port and cheese and we sat laughing and putting the world to rights with Brian and Rachel.

Having only had three hours sleep followed by a gallon of home brew and far too much port I finally crawled into my pit shortly after midnight.
Not a bad Christmas really... Same time next year?