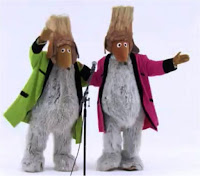 Last night as I listened to the radio I heard something which made me think. The average salary in the UK is £26 500. However the average house costs three hundred thousand pounds.
When I took out my morgage I was allowed to borrow up to three times my annual salary. On that basis most people are over two hundred thousand pounds short.
How does anyone afford a house these days?

I came home; "er indoors TM" was off work today. The plan was for us to take the dogs for a walk the moment I got home. Like I do shortly before 9am after every night shift. I came home and waited for over an hour. At ten o'clock with her still in her pyjamas I lost patience and went to bed.
I slept for a while; "Daddies Little Angel TM" phoned about... I have no idea what she wanted. I told her I was asleep and went back to sleep. I eventually got up to see what the dogs were barking about at 2.30pm. Fudge was rather indignant because Sid had crapped on the carpet. Again.

I had a rather late brekkie. Over that brekkie I had a look-see on-line. Recently I seem to have been added to a Facebook group which reports on the efficiency (or otherwise) of the local trains.
On the one hand I can understand people's frustrations at the delays. On the other hand I feel for the people who work on the trains. When the train runs late the poor train staff are late getting home too. It is not as though they run the trains late deliberately. And is eight minutes *really* such a big deal?
Whilst this group was started with good intentions I can't help but feel that in a very short time it has become something of a magnet for the whingers.

I had an email from LinkedIn. Apparently Joe Edwards is now a recruitment consultant at the therapies division of HCL Healthcare. I wonder who Joe Edwards is. This same email told me of a job opportunity that suited my profile; I could apply to become a tester of blood whilst serving on one of the Royal Navy's warships, and it also told me that I have had my skill in clinical research endorsed by someone that I've never met.
I rarely use LinkedIn; mainly because it seems to think I know all sorts of people of whom I have never heard and offers me jobs which are utterly unsuitable for me based on recommendations about me which are made up.

And I saw that an old schoolfriend of mine is to become Rye's Town Crier. Whilst I'm rather pleased for him I must admit to a pang of jealousy. Being a gobby sort of person I could do that. How does one become a Town Crier?

"er indoors TM" apppeared at 4pm. She'd been shopping for (or should that be for?) "Daddies Little Angel TM". We took the dogs out then. It was a shame that it was dark, but Fudge enjoyed his walk. I don't think Sid did much. He did straggle rather a lot.

Once home we had a little tidy up and prepared for the evening. "er indoors TM" was staging a candle party. Much as I can be cynical about the things, the candles aren't bad. And we had a really good time laughing and chatting and even Chromecasting wombles with old friends... really must do this more often.