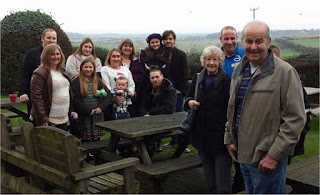 After a surprisingly good kip I had a look-see at the Internet over brekkie. Yesterday we decided not to go to Imber in Wiltshire. There's no denying that distance was an issue in our deciding not to go, but looking at all the photos on-line had we known that so many friends were going, we may well have made the effort. Oh well... I see the place is open again at Easter. Maybe then?
I also saw one or two snippets about the latest Star Wars film before I could look away. I can't pretend to be a fan of the genre, but I was vaguely thinking about a trip to the cinema at some point over the next few days. I don't need to go now. It is ironic how those who were so vocal about spoilers not being given are now so keen to give them themselves.
I then drove round to collect "My Boy TM" and his crew to drive down to Icklesham. The tribe was gathering for a meal to celebrate my mum's eigthieth birthday. I'd booked a table at the Queen's Head in Icklesham because it was equally inconvenient for everyone and because I have had good experiences there in the past.
Fourteen of us (and the littlun) sat down for a rather good dinner. I'd certainly go back there. And Mum seemed to enjoy herself which was the main thing.

The Hastings contingent went back to Hastings. We stopped off in Rye on our way home for a little look-see. We mooched the shops then had hot chocolate. Very nice. Once home we ran the dogs round to the park, then the fruits of our loins went their various ways.

I had a phone call about the episode I had in Morrisons a couple of weeks ago. They told me that due to confidentiality issues they couldn't tell me what action they had taken against the member of staff who refused to sell me more than six bags of sweets. And they hoped I had had a good Christmas. And then emailed me to ask my opinion of how the phone call went.

I then slobbed in front of the telly for much of the rest of the day. I was feeling rather tired after today's family do...