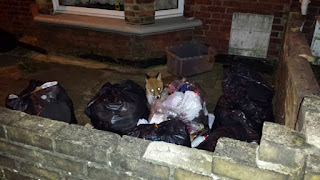 I woke up at silly o'clock this morning. I waatched rubbish on the telly then sparked up my lap-top. I had an email from my mobile phone provider this morning. They'd sent me a Christmas present. Or so they claimed. Having clicked on the link they sent it looked very much like they'd actually given me the opportunity to provide all my personal details to a spamming site.
If they wanted to give me a free e-book for my Kindle then the link would go directly to Amazon; not some third party company of whom I had never previousy heard.

As I got into my car this morning something caught my eye. A fox was walking up the pavement. I got out of my car and followed him. The fox went into a garden and started ripping into the bin bags which had been left for the dustmen. Foxy knew I was watching him; he didn't seem bothered as I took photos of him from only two yards away.
After a few minutes he lost interest in whatever he was eating from the bin and wandered off up the road. I watched him for a while then drove off down the road. Yesterday I'd spent ages scraping ice from the car; this morning I had no scraping to do.
As I drove to work the pundits on the radio were talking about the US presidential candidate Donald Trump. He is being very politically incorrect; among other rather outrageous things he's calling for Muslims to be banned from the USA. His opponents are noisily drawing parrallels between his policies and those of Adolf Hitler.
What worries me isn't so much those parrallels as the fact that his policies are actually proving to be rather popular. As were those of Hitler's in the Germany of the 1930s.
Have I ever mentioned that I don't think democracy is all it is cracked out to be?

I got to work... and came home afterwards. Once home I took both dogs for a walk, then over a spot of dinner watched a film. "The Colony" is perhaps the worst film I have ever seen. It started off quite well with a post-apocalyptic colony doing the best they could in a frozen wasteland. It started off in a well thought out scenario and there was even a plausible plot. But it was not long before the director decided he's rather have a film about zombie cannibals instead. And so for some inexplicable reason the second half of the film was just a gratuitous bloodbath which bore no relation to what had gone before.

As I watched this drivel I had a dog on either side of me. For all that "Furry Face TM" has known Sid for years, he is a jealous dog. I tried sitting on the sofa with both dogs together but that didn't work. If Sid was already on the sofa with me then Fudge would sulk and wouldn't come up. If Fudge was already up with me he would snap at Sid when he tried to jump up.
So I plonked each dog at either end of the sofa and sat between them. Sid fell asleep whilst Fudge glared at him. I'm hoping Fudge will get used to the situation. He doesn't like having a house guest...