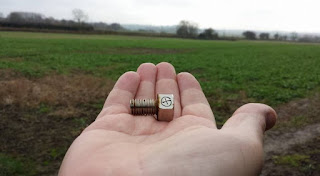 I slept like a log last night; sometimes I see every hour of the night, other times I am absolutely sparko. I was finally woken by the noise of a postman bashing on next door's front door shortly before 7am.
Most weekends in my life are busy; this one seems to have been especially so. I think I could really have done with taking today off work. Or perhaps I'm still somewhat under the weather from the excesses of Saturday.
"My Boy TM" is swearing off of the beer. I wonder if I should do the same. Or (at the very least) only drink a couple of pints rather than a couple of gallons in future.

Over brekkie I tried to see what was happening in cyberspace. I tried, but gave up. "Furry Face TM" was in a particularly soppy mood and was resting his chin on my hand. It is difficult to work the keyboard when he does that so I took him for a walk instead. As we walked we met all sorts of people and the vast majority of people were fine. Except one bloke. My dog was walking straight past him when (for no apparent reason) this chap started shrieking and jumping about seemingly in terror. This spooked "Furry Face TM" who woofed at him. Said nutter then started ranting at me abbout how all dogs should be on leads. I politetly gave him two minutes of my time before telling him to get knotted. Funnily enough not ten seconds later a couple of lads rode past on their bikes so I turned and watched to see what would happen when they caught up with the nutter. Sure enough he leapt about and started hollering at them too.

We came home, I pootled for a few minutes then went to the dentist. Bearing in mind the amount of letters they've recently sent me about the managerial and administrative changes they've been making I was expecting to see massive alterations around the place. i was disappointed; the only difference was that they had new chairs. Rather uncomfortable ones I thought.
The dentist rooted about in my gob, then whinged about why I don't go to their dental hygenist as often as I might. Apparently on my insurance plan I get two free visits to the hygenist every year. No one told me... or did they? Perhaps if they sent me less junk mail I might pay more attention to the mail they do send. But I made an appointment for next week to have the hygenist do her thing inside my gob.

I set off to work a little earlier than I might have done. I couldn't face the radio this morning so instead I sang along to the rude songs on one of my "Ivor Biggun" CDs. I drove to Canterbury via Wye where I had a little rummage in some undergrowth for a calendar-filling geocache for the day. I then went on to Morrisons where I joined the "ten items or less" queue and my piss boiled when I realised the chap in front had eleven items. I counted them.

I had this plan to buy "er indoors TM" a Christmas pressie from Go Outdoors. She was disappointed in her walking trousers so I thought I'd get har a new pair. But I got there to realise I have no idea what size she takes. So instead I went on to work.