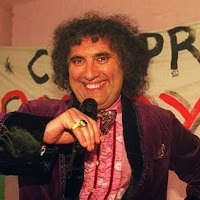 The noise of the torrential rain woke me at 1am; I woke to find my CPAP machine was going at full pelt trying to inflate me like a balloon. I took it off and dozed fitfully and intermittently until 3am when I put it back on again. I then slept like a log until two minutes before the alarm went off. If nothing else this proves that I don't really get any proper sleep without the thing blowing up my nose.
Has this finally put the kibosh on my going camping?

Over brekkie I watched the last episode of the current season of "Detectorists"; a gentle little comedy. It has beleivable characters and if the people are beleiveable then any story become plausible.

As I drove to work my piss boiled at the rubbish that was being spouted in the news. The pundits were all a-panic because the Kepler space probe has seen a huge solar flare from another star and the entire concept of solar flares was hitherto unknown to those who spout the daily news.
Apparently it came as a surprise to them that our sun could have a "hiccup" ant any moment and effectively blat out all of our electronics. Surely everyone knows this?

There was also the apparently sad tale of a family who have moved to France because the drugs to treat Duchenne's muscular dystrophy aren't available on the NHS. All I can say is that my friends who have Duchenne's muscular dystrophy are managing very well with what the NHS dishes out. Perhaps they might not be getting the very latest developments in the pharmaceutical world, but then the NHS did say that "more evidence from pharmaceuticals was needed on the benefits" before they'd squander precious resources on untried and unproven medicines. Perhaps the NHS has a point?

I stopped off at Morrisons for this and that. This and that came to £2.31. I didn't have that in change so I gave the nice lady on the till thirty one pence in change and a ten pound note. She looked at me as though I was the dog poo on her shoe, and she gave me eight pounds and four pence in change. Result!! - I was four pence up on the deal.

I got to work, did my bit, and saw an old friend.
Or so I thought.
This was someone I'd known for twenty years until I was professionally relocated to Canterbury. We'd been good friends; I'd taken her children camping (as Cub Scouts) more times than I could remember. I beamed smiles; she glanced at me, mumbled something, and hurried off.
In the words of Bobby Chariot...