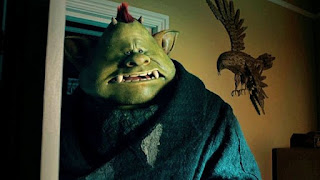 Over brekkie I read the sad news that Lemmy from Motorhead had died. Having been diagnosed with cancer on Boxing Day he died soon after.
This sparked a few memories for me. I first heard his music in the late 70s when a friend was playing it in his bedroom. At that particular moment I was in my bedroom a quarter of a mile away. Over the next day or so I subesquently heard it in several places nearby. Having been told that Motorhead's gimmick was "LOUD!", for a day or so my pal Philip Crosby used to hang the speakers of his record player out of his bedroom window and broadcast Motorhead's albums to much of the Ore area of Hastings until the police stopped him from doing so. My pal Phil honestly thought he was providing a public service by playing Motorhead so loud that it really could be heard clearly at distances of up to a mile, and he was devastated to find that no one (other than him) wanted to hear his noise. He was far more upset to find that he was regarded as a nuisance than he ever was by the noise abatement orders.
And now forty years later there are still so many live bands following Motorhead's (and Phil's) example.I know I am in a very small minority, but ever since that episode I've felt that Lemmy and Motorhead did a lot of damage to the live music scene. No matter how loud you turn it up, crap music remains crap music.

I farted around for most of the morning; killing time until "er indoors TM" got up. I looked at the household accounts (ouch!) and had a root through my letter rack. I’ve not done that for a while.
There was a *really* good Christmas card from the RNIB, and another from SightSavers. Whilst I realise they get these things done in bulk and therefore cheaply I can’t help but feel I’d rather they spend the money I give them on something other than sending me a Christmas card. There was also a card from the garage with a voucher offering me fifteen quid off of my next service. Now *they* can carry on sending me Christmas cards.
I then looked for geo-puzzles in the general vicinity of the Imperial War Museum. There was only one; I solved it just as "er indoors TM" got up and announced she was off out with her mates.

Being at something of a loose end I took the dogs for a walk (posting my brother's birthday card as we went). Apart from Sid rolling in something disgusting the walk passed off mostly without excitement.
Mind you I was amazed at the traffic queueing to get into the nearby outlet centre. All the roads were jammed solid with a queue of cars several hundred yards long waiting to get into the (full) overflow car park.

Once home I checked the booking with the pub for the geo-event I'm hosting on Friday, and I got a personalised email from geo-HQ in Seattle thanking me for putting on the thing. That was nice of them. They've asked if I can send them some photos from the day. I can do that; I take photos from time to time.

I then had a rummage in the fridge and curried up pretty much all the leftovers that I could find. That would save "er indoors TM" cooking if and when she gets home. I have this theory that if I cook dinner every so often she'll realise it is better if she does all the cooking.
As the curry simmered I two loads of washing, ran the dishwasher and ran round with the Hoover before settling down to watch one of my Christmas presents. You can't beat the Three Stooges.

We eventually scoffed the curry whilst watching SkyTV's "Fungus the Bogeyman". Both were rather good...