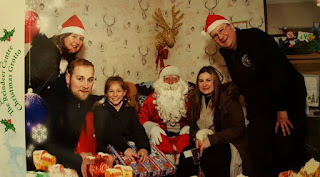 I came down and was very pleased to see that there had been no "accidents" overnight. Over brekkie I pondered geo-puzzles. There is one in particular which had had me thinking (on and off) for well oover a year. As i devoured my toast I had a stroke of genuis when I realised.... well, I won't say what I realised as it has taken me so long to realise it. However my genius seems to leavee a lot to be desired. I think it isn't giving away any secrets to say that it is (probably) is in the general area of a triangle with vertices at Tunbridge Wells, Paddock Wood and Cranbrook. Unfortunately my calculations have placed it in a parrallel universe which features a negative latitude.
As I tried to correct my error "Furry Face TM" was snuggling closer and closer to me. For all that he acts the problem child in public, he is actually a rather affectionate little dog, and since Sid moved in with us, Fudge has become rather clingy.

Once "er indoors TM" was ready we set off to Bethersden. Santa was at the Reindeer farm today so we thought that Lacey might like to go see him. Again. We went on the weekend before Christmas last year and it was so incredibly busy. It was busy today, but not as bad as last year. This year we saw Santa after about an hour's wait. Last year we queued for an hour just to get tickets.
We saw Santa; he was really good. And then we walked through the winter scenes; even seeing the foxy one from "Frozen". I then spent a small fortune getting fridge magnets and keyrings and snow globes of our visit to Santa.
We weree peckish; we had a quick sausage roll in the restaurant, and then had a go at the tombola. Cheryl told the Mayor off for being a cheapskate and Lacey walked away with three prizes.
From here we went on to the animals. Reindeer, drizzledeer (like reindeer but smaller), stormdeer (like reindeer but bigger), donkeys, emus, meerkats, iguanaa, ducks, pythons, pigs. All sorts of creatures. "My Boy TM" blagged some carrots and had a whale of a time feeding them to every animal that eats carrots (and one or two that don't).
You can see what we saw by clicking here.

All too soon it was time to go; family had things to do and places to go. We drove over to Canterbury. "er indoors TM" had bought a jumper from "Go Outdoors" a while back only to find a hole in it. The nice people at "Go Outdoors" were really helpful and changed it right away.
We then went on to the Cheapo-Bargains shop for some cheapo-bargains, and then on to McDonalds for a spot of McLate McLunch. Again I had McKFC and was loudly telling "er indoors TM" that I like McKFC when the little boy at the next table told me that KFC was rubbish.

Once back in Ashford we ran the dogs round to the park and back just as it was getting dark. As we walked I met an old friend from my days as a cub scout leader. She too had become disillusioned with the way things were going at our old scout group, and we spent five minutes whinging before saying goodbye for another few years.

We came home; the dogs had their tea and soon both were snoring. Sid on one sofa, Fudge snuggling up to me on the other. Did I mention that Sid's visit has made him rather clingy?