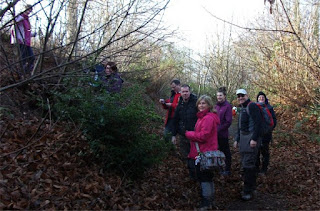 I had a quick look-see on-line as I scoffed brekkie. Photos of yesterday's booze-up seemed to have been popular. I say "popular"; a lot of people had clicked the like button. Did they actually like them or was that just being polite..... this morning found me in a rather paranoid frame of mind. For example... many people don't realise that when they post something on social media it posts an approximate location of where you are at that time. So when someone tells me that they would be in central London at a certain time but actually seemed to be transmitting from just down the road I spent hours wondering if there has been a hiccup of technology or whether the talk of London was just a ruse, an oversight or a deliberate attempt to avoid me. Whichever it was I am sure it was of far less significance than I have taken it to be. I'm silly like that.
Perhaps it was the hangover? I like going for a booze-up. I do *not* like the general feeling of grottiness (and vague guilt) that follows it.

I must admit to a wry smile when I read that the fan-funded Star Trek movie project "Axanar" has been kiboshed by the people who own the copyrights to all things Star Trek. Much as I like watching the fan-made stuff there is a very fine line between making these fan movies for fun and making a mint out of them. And as Paramount are looking to release a new Star Trek film and a new Star Trek series in the near future is anyone really surprised that those withte legal right to make money from the franchise don't want anyone else dipping into their pot?

With toast scoffed I took "Furry Face TM" for a walk. He was full of enthusiasm to go out. Sid went and hid when he saw the leads so I left him at home. He didn't want to come out so I wasn't going to force him (today).
I'd had a report that one of my urban geo-hides had gone soggy and needed replacement, so we walked round the streets to Banks Road. Sure enough the thing was wringing wet; it was the work of a second to swap out the old sodden one for a new dry one. Mind you there was no need for the old one to have been wet. If only people put the things back with the open end facing down then the rain wouldn't fill them up.

Once home I got "Hannah" programmed for the day. For once we left the dogs at home and drove up to Faversham to meet out geo-buddies. Surprisingly the journey took rather longer than I expected, but soon enough ten of us were gathered together and we had a really good wander around Bysing Wood. Only about a mile; only about an hour. But still a good stroll with good company.
From the woods we made our way to Teynham where the county's hunters of tupperware were meeting up. We spent an couple of hours chatting, then went out for another little walk after lunch.
I then slept much of the way home.

I took a few photos whilst we were out. Once home I put them on-line and then dozed until Jimbo called to tek us round to Steve and Sarah. Chatting with friends, food and drink, ChromeCast quizzees and even a new card game to play.
Not a bad way to see in the New Year...