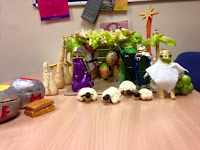 I woke up in desperate need of the loo at 3am (it's an "old man" thing) and was surprised at just how cold the house was. However there was a reason for it; the back door was wide open. I went round the house and had a quick roll-call. All were present, I coouldn't see any burglars, and presumably no one was in the back garden so I closed and locked the door.
I didn't really get back to sleep after that. I lay awake listening to "er indoors TM" snoring before finally getting up at 7am. I spent a little while learning how to operate the auto-focus on my phone's camera, then carried on pruning the list of people I follow on social media. Much as I like the entire concept of "social media" it only really works for me if actually know the person who is spouting twaddle. Whenever I look on-line so often I find myself wondering exactly who all these people are.

The plan for today had been to take a day's annual leave to help "Daddies Little Angel TM" move house. To cut a very long and convoluted story short she didn't move today. So beaing in mind that last year I lost holiday where I didn't use it all, I decided to carry on taking today as holiday.

I took "Furry Face TM" for his morning constitutional. As we walked we saw Jimbo driving to work so I shouted abuse (as one does) only to find it wasn’t Jimbo; it was some random little old lady. Woops (!)
We walked out as far as Park Farm, replaced a missing geocache, and came home via some fox poo in Willesborough Dykes. That dog hadn’t been off the lead for more than a minute before he’s smothered himself in the foul-smelling muck.
We cut short our walk and came straight home. Bath time !! But despite vigourous and prolonged scrubbing he remained a tad whiffy all day.

I was about to do the monthly accounts when the phone rang. Someone whose name clearly wasn’t Kevin (as he claimed) demanded to be told how my name was pronounced. He spelled my name out; "c-o-l-q-u-o-n" then got quite aggressive when I told him this wasn’t my name. I wasted ten minutes of his time before hanging up on him.

I set about the monthly accounts and on seeing that no payments had been taken for the buildings and contents insurance since September I gave the company a ring. The nice lady (Nikki) was very helpful; payments were due to start again next month. But when she checked our data there was a problem. Because we live within four hundred metres of a river our current insurer won’t touch us. The nice lady said she’d get back to us… after an hour she did.
Because some twit at the Environment Agency claims we live in an area with a high risk of flooding our monthly building and contents insurance premiums have been doubled.

A day's holiday is never complete without ironing; if nothing else I got to try out my new ironing board cover today. Quite sexy if you like that sort of thing. As I ironed I watched a film. "Rise of the Footsoldier" is a rather violent film about drug gangs in Essex. I quite liked it; I thought I'd give it a go as the sequel is coming out soon and there is talk of "My Boy TM" taking his old man to the cinema.
As I watched, my phone beeped. A message. The judging of the vegetable nativity had taken place and the winner announced. It was us! Our team had won! Result !! It was only a shame I coldn't have been there for the victory.

With ironing done I spent an hour or so working on my new Wherigo, and once I was Wheri-ed out I sorted my undercrackers whilst watching "Upstairs Downstairs"; far more genteel than "Rise of the Footsoldier". So much so that I doozed off only to be woken by "er indoors TM" coming home from work.
We downed a rather good bottle of plonk over a rather good bit of dinner. "er indoors TM" does boil up a decent bit of scran...