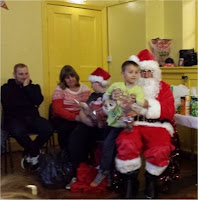 Yesterday I was voted "Geocacher of the Year" by the Kent caching fraternity. I'm still somewhat amazed at the honour. On reflection there are many people who do far more for the hobby than I do; all I do is ask if anyone fancies coming for a walk, arrange a meeting time and place and take loads of photos. Oh - and am generally rather noisy. But I got the award... I'm rathered flattered and very humbled.
I'd like to offer up a heartfelt "Thank You" to everyone who voted for me.

I felt a little fragile over brekkie; can't imagine why. I then took "Furry Face TM" for a little walk round the park. He chased some ducks and rolled in a dead rat. He seemed happy with that. I had intended to walk a lot further, but it was raining; that annoying fine rain which doesn't actually seem very heavy but gets you soaked. And I was soon soaked.
Once home I changed into dry clothes and over a cuppa I solved a geo-puzzle. I'd been pondering it (on and off) for the last couple of weeks. Yesterday I got to speak with the chap who'd set the puzzle. He gave me a pointer annd it turned out that I had been seriously over-complicating matters.
I then spent a couple of minutes organising a little walk for a calendar-filler day for two weeks time. If any of my loyal readers are at a loose end on the Monday before Christmas the details are on-line here.

"er indoors TM" then set off to Folkestone to collect "Daddies Little Angel TM" and her entourage. I then went to sit in Trap One for the fourth time of the morning (its a beer thing) then drove round to collect "My Boy TM" and his branch of the tribe. We then set off to Hastings, and pausing only brieflly for some McLunch we were soon at the annual family Christmas party. Bouncy castle, party games, a dancing display, even a visit from Santa; the annual Christmas bash is always a fun afternoon. I took several photos; it was only a shame we had to take the long way home as the A28 was apparently closed.

Once home I too "Furry Face TM" round the block quickly. It was still raining; we got soaked again. I showered, and with "er indoors TM" off bowling I spent the evening slobbed in front of the telly...