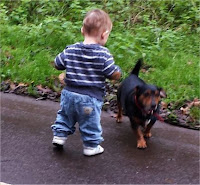 Apparently "er indoors TM" chivvied the dogs back downstairs to their baskets four times last night. I didn't hear any of it; I slept like a log last night. I suspect the rather good steak dinner had something to do with it. Having said that I woke this morning with something of a stomach ache.

Over brekkie I checked out the Internet. Christmas and Star Wars seemed to be being bandied about in equal proportion, and the teachers of my aquiantance were crowing that today was their last day at work. Sometimes teachers wind me up *just* a little bit. They seem to be *very* vocal in telling the world about their extended holidays (something like thirteen weeks?) and then get all upset when the general public doesn't respect the fact that their jobs are very demanding and they do a *lot* of preparation in their own time.
All I can say on the matter is that the average teacher seems to be breaking up for Christmas sometime during the afternoon today; I break up for Christmas at 8.15 am on Christmas morning (and will probably sleep for much of the day).

I had an email (well sixty of the things) telling me that the geo-series I put out yesterday had gone live. There would seem not to have been any problems with the series; I was pleased about that. Whilst anyone can go find them whenever they like (and some already have), I'm hoping one or two people might like to come out for a walk in their general direction with me on New Year's Day. I've set it all up as a Facebook event which anyone can join.

"er indoors TM" wanted to know if any of her best tops were in the ironing basket. I wish she wouldn't ask things like that - how am I supposed to know a "best" top from any other sort. We have rather different criteria as to what constitures a "best top" (woof!) I just iron them - I don't grade them. She then spent five minutes telling me how stupid I was.... it turns out she wanted a *vest* top.
I know what those are.

I then put the leads on the dogs and we walked round to the park where we met "Daddies Little Angel TM" and Stormageddon - Bringer of Destruction TM". Littlun beamed when he saw us and we had a good walk around the park.
Once home I then drove down to the marsh - today was a geo-calendar day. I made rather hard work of finding a film pot under a rock down there. Then (as a Christmas treat) I got the car valeted. It hadn't been done for some time. It was *rather* grubby but is amazingly clean now.
I came home to find "Daddies Little Angel TM" still in residence. She was waiting delivery of a replacement phone. "Stormageddon - Bringer of Destruction TM" was contentedly wreaking destruction on our living room. As he pulled something electical I told him off. He sobbed for fifteen minutes; Granddads aren't supposed to do telling off.

Having seen off most of the contents of the living room "Daddies Little Angel TM" and "Stormageddon - Bringer of Destruction TM" went round to wreak havoc at Brian and Rachel's whilst I went to see the dental hygenist. She had a good rummage about inside my cake muncher, and I then spent a couple of hours watching Clint Eastwood escaping from Alcatraz on the telly whilst doing the ironing. I'd not done that for some time. (Ironing *and* watching Clint Eastwood)

"er indoors TM" eventually came home armed with fish 'n' chips (or chips fish-n as "My Boy TM" used to call it) and we spent the evening catching up with stuff recorded onto the SkyPlus box. "er indoors TM" had had a better offer for the evening that she had turned down... she could have gone Ingressing mob-handed with the blues but she had thought better of the idea.
I wonder if it was my griping that it was exactly this sort of thing that made me pack up the whole Ingressing game that changed her mind... or perhaps it was just anything for a quiet life...?