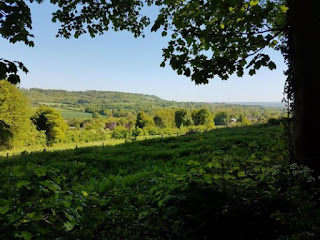 As I drove home I found myself reflecting on last night's night shift. I seem to have something of an issue with night shifts. Whenever I have a night shift I seem to spend a day or so on the lead up to the shift fretting about it. I spent all of Saturday whinging that I had to work Sunday night, and I spent a large part of Sunday feeling that all I was doing was waiting for time to pass so I could start work at 9pm.
How daft.
I probably fitted more into Saturday and yesterday morning than many people fitted into the entire Bank Holiday weekend. ​
Mind you I'm not complaining about doing the night work. It gives me time free mid-week to do all sorts of things I wouldn't otherwise do. And I do like the sense of being trusted to get on with the job unsupervised; something that only five years ago I wondered if I would ever experience again.

As I drove home the pundits on the radio were talking to Guernsey’s equivalent of Prime Minister. Guernsey’s equivalent of parliament is considering allowing euthanasia for very specific cases. Basically the suggestion is that anyone with less than six months to live and who is suffering is to be allowed to choose to end their pain. It seemed a sensible proposition with all sorts of controls. They then wheeled in some idiot woman who was billed as a cross party spokeswoman against euthanasia who asked what would happen if someone wanted to kill off their grannie for her money. The answer was obvious – the checks in the proposed system would not allow grannie to be gassed. She then posited all sorts of other ridiculous scenarios all of which were patently nonsensical and were all immediately dismissed. Not happy with this she then made all sorts of allegations about Guernsey’s health care system which were immediately shown not to be true.
Why do they have these idiots on the radio?

Once home I quickly got myself organized. I *could* have wasted the day in bed; instead we took the dogs out for a walk. There was a minor delay with fire engines blocking the road, but we were soon at a car park in Shoreham where we met up with Karl, Tracey and Charlotte, and we went for a rather good wander following the “wonderful walk” series of geocaches. There is a rather good walk along the river from Shoreham up to the Roman villa at Lullingstone (where we had ice creams), and back across the top of the golf course. There are some beautiful views along this route; I took quite a few photos as we went.
However compared to other walks we’ve done, this one was very busy. Perhaps it was the good weather, perhaps it was because today was a bank holiday, but the normal people were out in force. And it was rather worrying how unprepared many of the normal people were. Several of them were asking us for directions as they had no maps and no idea where they were.

The dogs seemed to enjoy the walk. They certainly enjoyed playing in the river. Perhaps the mid-day heat was a little too much for them, but quite a bit of the walk was in shady woodland, and we’d taken plenty of water for them.

After seven miles we were back where we started; we walked down to the Kings Head for a post-walk pint. After a few minutes the shrieking harridan left, and after a few more minutes the one chain-smoking on the next table also cleared off, and we had a rather good drink (or two).

We would have got home faster had there not been a sheep wandering in the lane. Once home we had a rather quiet evening as both dogs snored.
I should have an early night too…