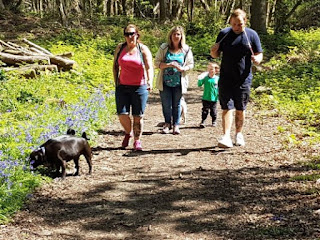 I stood on the scales this morning. I’ve lost three pounds since the last time I did that, and just over a stone and a half since I started this most recent attempt at weight loss two months ago. I’ve often mentioned that losing weight is dead simple; there are two key points.
You bear in mind that the hole the food goes in to is far bigger than the hole it comes out of,
You realise that losing weight means you are constantly hungry.
A *lot* of people tell me that I shouldn’t be starving myself to lose weight… if I could find another weight loss plan that worked I’d be up for it.

Over brekkie I spent a little while doing my on-line “science of beer” course. I am seriously considering giving up with it. It is presented by very enthusiastic students who whilst obviously very keen do not speak English that well, and are pitching the course at the level of a rather thick primary school child.
I spent a few minutes solving geo-puzzles, then wrote up some CPD. I’m very good at actually keeping up to date with professional matters (even if I do say so myself), but I’m not as good as I might be at keeping my records up-to-date. I blogged half a dozen entries this morning; I’ve still got forty to write up.

"My Boy TM" and Rolo arrived, and we all drove round to the Warren where we met "Daddy’s Little Angel TM" and "Stormageddon - Bringer of Destruction TM". There was consternation before we’d even started as Pogo had been sick in the car. Poor Pogo – he doesn’t travel well.
We had a rather good family wander round the Warren. "Stormageddon - Bringer of Destruction TM" enjoyed playing on the rope swing, the dogs liked spuddling in the stagnant pond. And (bearing in mind yesterday’s debacle) Fudge was amazingly well behaved. I’d seriously considered keeping him on the lead for the whole walk, but that would have been mean. So I thought I’d give him a chance, and he was really well behaved.

I took a few photos as we walked. Once home I put them onto my Facebook page. Unlike yesterday it all worked fine on the first attempt.
We scoffed the last of the malt loaf for lunch, then I took myself off to bed for the afternoon.

I woke up to an empty house; "er indoors TM" must have taken the hounds for a walk. I hope they come home soon. I want my tea before I go off for the night shift…