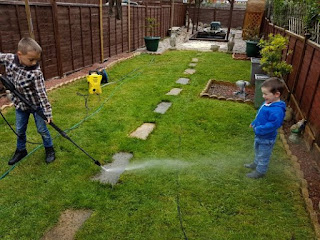 I ached a little when I emerged from my pit this morning. Not really surprising when you bear in mind yesterday’s exertions.
I popped some washing into the washing machine then had a look-see at the Internet as I do. With not much going on I did half an hour on the cryptography course for which I enrolled on Friday, then looked at the geo-map to plan a walk for next weekend.

Realising that dull jobs don’t do themselves I went into the garden and hung out the laundry. Then I mowed the lawn… Oh how I chuckled… The strimmer’s cutter is utterly poggered and keeps breaking every minute or so. And the dead man’s handle on the lawnmower keeps cutting out. I eventually got the lawn mowed in about ten times the amount of time the job should have taken.
I then got the pressure washer out to scrub down the paving stones and edging stones. As I sloshed "Daddy’s Little Angel TM" arrived with the entirety of her branch of the tribe. The boys had fun with the fish; my biggest Koi is now called “Dragonfish” and one of the darker ones is called “Bob”. However to avoid confusion all of the others are still called “Dave”.
Charlie then helped me with the pressure-washing, and not wanting to be left out, "Stormageddon - Bringer of Destruction TM" had a go and hosed down pretty much everything within a fifty-yard radius. The moment "Daddy’s Little Angel TM" went inside, both boys told me their new song. They’d learned it from You-Tube (or “Lube-Tube” as "Stormageddon - Bringer of Destruction TM" calls it). It is a song with which I expect most of my loyal readers are familiar – “it ain’t very funny but it is very runny…. It comes out your bum like a bullet out a gun…” It was at the point when I was teaching them the verses that they didn’t know that "Daddy’s Little Angel TM" came back and caught me red-handed. She wasn’t amused.

We had a cuppa, and then I realized why the pond wasn’t as full as it might be. The filter was leaking. A leaking pond filter means it needs cleaning out. The most recent fruit of my loin knows all about leaking filters, and it was at this point that they all cleared off leaving me up to my elbows in Koi poo.

Eventually I was done in the garden. "er indoors TM" took a break from decorating the kitchen to serve up cheese on toast (I’ve become quite a fan of that stuff). I posted some photos of the morning onto Facebook then drove round to see "My Boy TM"; I’ve had his waders in my car for some weeks.
The first fruit of my loins made me a cup of coffee using his new kettle. As kettles go it is a nice kettle. It has programmable settings and is transparent and has L.E.D.s which change colour as the water gets hotter. I have a kettle in my kitchen which also boils water for eighty quid cheaper. I mentioned this; he too was aware of cheaper kettles and ideally would have had one himself. But Cheryl had said it was a nice kettle and who was he to argue?
Together we went to B&Q; I bought something with which I can bypass the poggered bit of my lawnmower, and to replace my broken strimmer I got a pair of hand-operated shears (just like my gran used to have).

Once home I fixed my lawnmower; it now works. Whilst "er indoors TM" carried on decorating the kitchen I took the dogs to the park where we met "My Boy TM" and his tribe. Rolo picked fights with three different dogs, all of which were twenty times his size. We played in the river, we had a good walk.

I came home and put some shirts into the washing machine and again reviewed the geo-map. The walk I had been thinking about for next time wasn’t a clearly marked walk. Someone had put out several dozen caches in an area so this morning I asked if there was a route to follow to visit all of them. The reply I received wasn’t encouraging; suggesting I made it up as I went along. Also seeing that the previous cacher in the area had been unable to find several I decided to look elsewhere, and spent a few minutes puzzling puzzles.

Despite having been decorating all day, "er indoors TM" boiled up a rather good roast dinner, and as she went off bowling so I set about some ironing whilst watching “Happy” on Netflix.
I shall do some more of my cryptography in a minute…

It has been a beautiful day today – why couldn’t it have been like this yesterday?