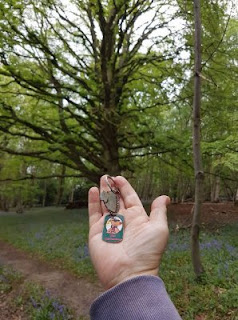 I wasn’t feeling on top form last night; a decent kip might have helped. It was a shame that the puppy decided to chew my elbow wanting to play at four o’clock. I lay awake fussing the puppy for an hour or so then got up.

Over brekkie I watched more of “The Mighty Boosh” then sparked up my lap-top to see if anything of note had happened overnight.
Yesterday I mentioned that some chap had found fault with the state of Viccie Park and had whinged about the matter on Facebook. The whinging was still going on this morning; it made for interesting reading, as does the entire Ashford Kent Today Facebook group. It is amazing how thick many of the people posting in that group are; reading the various posts it seems that all the wrongs of the world are directly attributable to Ashford’s council. Take the ongoing squabble about the lawn mowing in Viccie Park. The discussion carried on about lawns in general, and several people living in privately rented accommodation couldn’t understand that Ashford council have no responsibility for the upkeep of privately rented places.
And these people are allowed to vote…
I also had an email from Ambrose Thomas who (apparently) really liked the blog entry that I posted on the fourth of January this year. And then he tried to get me to advertise gas powered pressure washers.
He can go whistle.

I was pleased to see it was raining this morning; As I drove home yesterday I’d noticed that the car’s windscreen was rather grubby; I thought that the morning’s rain could wash it clean. And it did.
As I drove into Sissinghurst I saw that the rain had stopped, so I too stopped. There is a geocache there which is a little way off of the road, and with a few minutes spare I thought I might hunt it out.
The thing was called “Up the Garden Path” and it entailed a little walk through some rather pretty woodlands. As I walked I saw rabbits and squirrels, and heard loads of birds singing. It really made for a good start for the day.
The cache itself was a different story… Fortunately there was a good hint given as to where the thing was stashed; the given GPS co-ordinates were about twenty yards out. And the thing was filled with rain water. I sorted out the cache as best I could, but I can do nothing about dodgy co-ordinates. In a fit of foolish bravado I offered to take the thing on. But the person who originally hid it hasn’t logged into the geo-website for three years. Mind you the description did say she’d handed on the responsibility for the care of it to someone else (who hasn’t logged on for six years).
I found myself in something of a quandary. If I can make contact with whoever hid it I can take the cache over and make it good. If I can’t then it remains a leaking plastic sandwich box full of a sodden mess. But (on reflection) it would be a leaking plastic sandwich box full of a sodden mess which isn’t my problem.

I got back to my car and as I drove on to work the pundits on the radio were interviewing some woman. As I’d come into the interview half-way through I had no idea who or what she was. But she boiled my piss. She was expounding some theory that all email-sending apparatus should have some automatic device attached to it which delays sending any email posted after 11pm until the next morning (as she doesn’t like being woken by her phone when she gets emails in the small hours). The implication was that decent people would be in bed at 11pm and so wouldn’t be interested in sending or receiving emails.
I wonder if she’s ever heard of the concept of a night shift?

I got to work… had a rather busy day, and came home again (as I do). "er indoors TM" did a rather good dinner of sausages egg and beans (five hundred calories) then set off to craft night. I sat with my dogs and watched this week’s episode of “Gotham”. It was…
It was probably rather good; but watching the episodes one each week means I’ve completely forgotten all that was going on in the last episode by the time I watch the next one. I shall binge-watch it all on Netflix eventually… Mind you I was pleased to hear the term “undercrackers” used by Alfred.