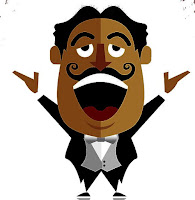 Last night I’d set my lap-top doing its update. The moment I emerged from my pit this morning I turned it on so it could finish the update. I had my ablutions, made a sandwich for lunch, emptied the dishwasher, generally idled about… it took over twenty minutes to finish doing its thing. And (as usual) despite what must have been a rather epic software update, there is no noticeable difference in how it works or in what it does.
As I scoffed my toast I watched an episode of “Thunderbirds are Go”. I must remember that this is a children’s show and as such it has several gaping plot holes. Today’s episode had one of these in which rather than rescuing people, International Rescue were playing at being James Bond.

I then had a quick look at the Internet. Some chap was running down the town on one of the various Facebook groups. He wrote “I was wondering have ABC’s lawnmowers all broken down ? While I appreciate that it’s been good grass growing conditions I have never seen so many uncut areas. Victoria Park which is normally kept cut is a shambles this year. If we want to encourage people to use green areas then we have to present them properly. Come on ABC get those mowers out and make Ashford look tidy”.
I know I shouldn’t get involved; social media can be a fight sometimes, but I couldn’t help but wonder what planet this bloke was on. I walked through Viccie Park with the dogs only yesterday. The council were out in force with lawnmowers keeping the place immaculate.
For once the majority agreed with me; as the day wore on, more and more people commented about what a good job is done in Viccie Park.

I went to the petrol station on my way to work. For once the apparently attractive grannie behind the counter had no admirers hounding her. As she took my money she was giving me a load of old flannel… perhaps that is the attraction. Perhaps she leads on the sad-acts that haunt the filling station?
As I walked out so two of here admirers ran in; each trying to beat the other to the till.

As I drove to work the pundits on the radio were discussing some new musical stage show in London. I’m not sure what one it was; I wasn’t really paying attention. But I listened when the chap said that he was amazed that the masses love musicals but don’t like operas. He then made the point that the teaching of music in schools leaves much to be desired, and if music were taught properly then people might actually have an appreciation for operas.
Perhaps they might. I don’t know. But this theory struck a chord with me. I found myself thinking back to room “A” at Hastings Grammar School over forty years ago and our music teacher “Pa” Jennings. There’s no denying that “Pa” was a very accomplished musician. However he was also a snob that typified all that was wrong with my old school.
I was very much out of place at Hastings Grammar School. It made no secret that it had pretentions of being a public school for the elite. I just got in because I’m a genius (albeit a pauper genius). For several years “Pa” Jennings tried to brainwash us into liking classical music. If we didn’t actually like it, he would settle for our pretending to like it. Hastings Grammar School catered for the sons of the elite; the elite were the sort of people who listened to classical music.
Had he actually instructed us on the subject on its own merits I expect I may well now think differently about classical music.

Getting to work took a little longer today having been sent to Pembury for the rest of the week. I got to work to get a message from "er indoors TM". She was fuming. Having spent a lot of time and effort creating a series of geocaches she’d received a very patronising message telling of how what she had done wasn’t up to scratch. As is so often the case it isn’t so much what was said but how it was said. And as is also so often the case, those offering the sage advice don’t realise that an opinion is not ipso-facto correct just because it is *your* opinion.
She was fuming… I’ve had similar messages from the same source in the past. I’ve calmed down a little but even now (twelve hours later) I’m still spitting bullets. After all is said and done the hobby of geocaching is *supposed* to be fun. Why do people try to spoil the fun? What do they hope to achieve? It is no secret that the vanishingly small minority that take it on themselves to be the self-appointed geo-police have all made themselves social pariahs.

And in other news Pogo has got a rash. "Daddy’s Little Angel TM" thinks it is from stinging nettles. She’s dabbing him with calamine lotion…