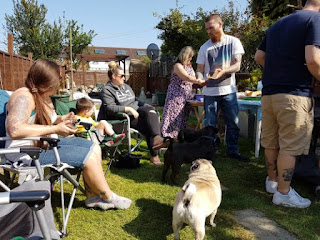 Surprisingly I didn’t sleep that well last night. After laying awake for some time I got up at six o’clock and spent a little while doing all the geo-admin for yesterday’s walk. Having had something of a GPS failure it took some sorting out. Eventually I found what had gone wrong with “Hannah”yesterday; I’d put my GPX file where my jpg should have been. I would suggest that my loyal readers take care where they stick their GPX files so as to avoid a similar calamity.
As I sat so Fudge came and sat with me. He seemed knackered after yesterday’s exertions.

I then had a look at my cryptography course. It was time for this week’s test… I’ve given up with the course. It was very interesting; but it was *very* difficult and today was the end of week test. I didn’t have the faintest idea what the questions were asking, let alone what the answers might be.
I shall go back to Netflix in the mornings before work.

With "er indoors TM" still asleep I got out my ingredients and mixed them all up (as one does). The intention was to make another couple of malt loaves as a final practice run for the works bake-off tomorrow. I experimented with soaking my sultanas and priming my yeast and left it all to prove (like they do on bake-off on the telly) whilst I had a go in the garden.
Last week I cobbled the lawnmower so that it wouldn’t keep cutting out, and it seemed to work. As I mowed Treacle came out to “help” me; having scurried up seemingly ten thousand dog turds before I started, Treacle then proceeded to lay what must have been her own bodyweight in dog dung. How can a small dog create so much?
I got the fence posts painted; regular readers of this drivel may recall that on 15 December of last year "My Boy TM" helped me (i.e. did all the work) to replace some fence panels. At the time it was too cold to fiddle about so I decided to paint the new posts later. I finally got round to doing it today. I then cut back the stuff flowing over the fence from next door, then had a little sit down; I was still aching from yesterday’s walk.

Once my loaves were out of the oven "er indoors TM" and I went to Tesco to get stuff for the feeding of the family. Tesco was heaving, but I met Dave Wickham – he used to be a cub leader with me all those years ago. His boys are now in their twenties – where does the time go?

We came home and got the garden organized, and soon the fruits of my loin and their tribes were with us. We had a rather good family barbeque. The morning had been overcast; we had thought about cancelling. But the sun came out, we scoffed ourselves silly, the dogs ran riot, and "Stormageddon - Bringer of Destruction TM" did his Morris dancing (!) and for an encore sang the diarrhea song (to the delight of his mother).

With everyone gone home (littluns have got school tomorrow) and "er indoors TM" off bowling I made the malt loaves I shall be taking to work tomorrow for the bake-off. Soaking the sultanas on the morning’s practice run worked so I did that again. The stuff is proving at the moment. Tomorrow will be the moment of truth. Though (in all honesty) whilst winning would be nice, I’d really be happy if people like the stuff and at the end of the day there was none left.