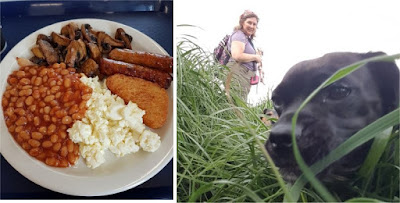 Did the storm eventually show up last night? I don’t know – I was asleep.
Over a cup of coffee I watched a disappointing episode of the new series of “Thunderbirds”; Lady Penelope was in a desert car race and the baddies were trying to steal the engine of the fastest car. Bearing in mind that they were in a car which was clearly far faster, I couldn’t help but wonder why.

As I drove to work I listened to the news on the radio. There was a *lot* of talk about the recent referendum in the Republic of Ireland in which they decided to overturn the archaic anti-abortion laws. And about time too.
The "Thought for the Day" bit was then given over to some vacuous windbag of a vicar who tried to do a complete about-turn on the Catholic church's long-standing policy purely to appeal to the popular opinion. I can't understand how religious leaders do this; they will completely reverse their viewpoints just to curry favour with the masses in a shallow attempt to reverse the ever declining numbers of bums on pews. Mind you I suppose the reason is self-evident. They are completely reversing their viewpoint because they want to reverse the ever declining numbers of bums on pews.
There was then an interview with one of the Democratic Unionist Party's MPs. They are dead against abortions and are adamant that what has happened in the Republic of Ireland has no bearing whatsoever on what happens in Northern Ireland. And bearing in mind that the Prime Minister's slender majority rests on keeping the DUP sweet, they will get their way. Because what the DUP wants is what the DUP gets.
British democracy really is a farce isn't it? The DUP has ten MPs but effectively has *far* more influence on policy than the Labour party and the Liberal Democrats combined who together have nearly thirty times as many MPs.

I got to work, and went to the canteen for a fry-up. I might have been working on the Bank Holiday, but I thought I would make the most of it. And suitably replete I got on with the morning's work. It wasn’t long before I was on my way back home.

Once home I looked at the internet over a spot of lunch and my piss boiled as I read the Facebook Geocaching UK page. Today’s squabble was incited by those who have been hunting Tupperware since the very beginning who have dedicated GPS units and who resent those who are new to the game. These old lags seem to have a *major* problem with those who use Smartphones to play the game. Particularly because one of the many ways in which a Smartphone is superior to a GPS unit is that it can log trackables instantly (and a GPS can’t). The ability to log a trackable instantly isn’t something to be sniffed at (!)
Today there were those who were saying that by expecting people to be able to log a trackable instantly I was discriminating against the less well-off who can’t afford a Smartphone.
What utter rubbish.
With eighty-five per cent of the nation having Smartphones (and this not being the stone age) I can’t help but think that some people should stop being so petty and argumentative.
That Facebook page is just one big fight; those with nothing better to do just to stir up bad feeling and arguments because they can. I’ve unsubscribed from that group.

I dozed off… when I woke up it had cooled down outside and was cool enough to take the dogs out. "er indoors TM" and I took the hounds down to High Halden where we had a rather good walk. Perhaps shorter than we often walk, but a rather good wander nonetheless.
It was a shame that Treacle deliberately escaped her harness to chase the sheep, but she was soon recaptured.
I took a few photos as we walked.

Once home the dogs shouted at new-next-door’s dogs. New-next-door had visitors – someone with whom I used to work for over twenty years. Hopefully he’ll be a frequent visitor…
"er indoors TM" is boiling up some dinner… Suddenly I’m very hungry…
Posted by Manky Badger at 8:48 pm