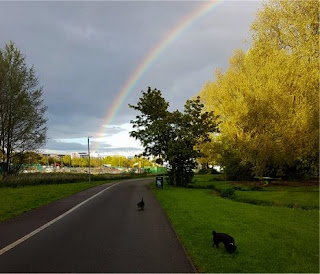 Before brekkie I had my weekly weigh-in. I’ve shifted another pound in weight. I was rather pleased about that.
Fudge sat with me as I scoffed toast and watched last night’s episode of “Gotham”. It was rather good; Doctor Bashir (from Star Trek) makes a rather good villain.
I then had my morning look at the Internet and was a tad disappointed. There was very little happening on Facebook, and (apart from an email telling me of nine vacancies in Essex I might apply for) my in-box was equally uninspiring.

As I drove to work the pundits on the radio were discussing the allegations that have been made against the Speaker of the House of Commons John Berco. He's been accused of bullying his secretary. Some rather damning things have been said about him and his bullying behavior. At the same time he's got half a dozen other long-standing employees all of whom (apparently) are saying what a brilliant boss he is.
I found myself thinking about this perhaps more than I should have done. Workplace bullying is *such* a difficult subject. At different times I worked under people I considered to be really nasty bullies. I felt constantly victimised and threatened by their conduct and attitude. However at the same time there were other people in the workplace who felt I was over-reacting and that these people were absolutely their best mates. Were these actual bullies who were really abusing their position of authority, or was it just a clash of personalities with no one actually at fault? I suppose it is all in the perception. What one person sees as a joke, another sees as harassment? Or should I have lodged formal grievances?

There was also talk of unrest in our universities. Several companies have set up to do the students’ homework for them. For as little as twenty quid you can get an essay written for you. For about a thousand quid you can get a dissertation.  Plagiarism and cheating, or entrepreneurial spirit?
But recently this sad state of affairs has taken a rather nasty turn. Having paid someone to blag their homework for them, these students are now being blackmailed by the very people they paid to do their homework. Unless they pay the people who provided their essays, these people are threatening to expose them for the cheats they are.
What a sad world we live in.

With work done I walked the dogs. Bowens Field was flooded. As we walked from Bowen’s Field toward the park I found myself carrying a bag of dog poo (as I often do). Usually I drop it in the dog poo bin along that path. Not today though – the bin has gone. Completely gone. I wonder where?
Then the rain started.
It didn’t last long… my shoes are on the radiator. I hope they dry in time for work tomorrow…