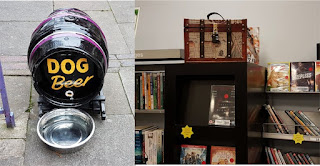 I slept quite well, but woke with something of a backache. I blame all the walking round London yesterday. Not a lot had happened on Facebook overnight, but I did get an email telling me how another of the world’s top one per cent of geocachers had been announced. This chap has contributed to the hobby by hiding four caches. Four ! I’ve only hidden a hundred and ninety so in comparison I am really crap.
Or so I thought… I’ve seen that Geo-HQ have release a press statement about their rewarding the top one per cent of geocachers – you can see it here. Basically they’ve admitted the way they chose the top one per cent was flawed and was insulting to pretty much everyone.
I might just start putting out more caches now they’ve said sorry.

I spent a little while preparing for my next geo-trip to London. There is a fifteen-stage pub crawl round central London; at each point you get information for the next; eventually getting to the final location at which a piece of Tupperware has been cunningly concealed. Having stalked the geo-profiles of people who’ve done this ale train, if nothing else I have an idea of some of the London puzzles I need to solve before I head to the wicked city again.
I’ve got a vague idea to do this on my birthday…

Being on a week’s holiday I’d arranged to have the boiler serviced today. The plumber was due at 9am. He was a tad early; he was in and out by ten to nine.
I set the washing machine loose on some laundry and I took the dogs for a walk. There was the usual idiot on the path between Bowens Field and Viccie Park. With two parks to use, he tries to play “fetch” with his Labrador along a narrow cycle path. There’s a river on one side and a swamp on the other, and he wonders why he keeps losing the ball.
As we came to Viccie Park I saw the Jehovah’s Witnesses weren’t there. They’ve not been there for a week or so. Perhaps it is too cold to save sinners?

We came home to find a “For Sale” sign on “nice-next-door”. I sighed. I think that house is cursed. No one lasts there for any length of time. When we moved in (in 1991) there was an old lady in there. She gave way to another old lady who was succeeded by Australians who used to do nudey sunbathing (result!). There was then a young family, and then an older family who had no concept of curtains in the toilet. There was a couple of young lads, then the drunken Irishman. There was the young family about whom we were always being bothered by debt collectors. There were those with the huge dogs. There was the young lady whose pregnancy seemed to last forever, then the current incumbents. In between times the place was empty for up to a year (at least twice). Everyone living there seemed to be of the opinion that they were doing the house up to sell at a profit. It has been stripped to a shell at least twice…
Perhaps no one wants to live next door to me… I wouldn’t.

I came in to find that according to our smart meter it cost eight pence to do one wash-load. That’s not bad. I hung it out to dry and then spent a little while going through my letter rack. I found a fifteen per cent off voucher for Matalan which expired yesterday. I saw the monthly direct debit for my car’s road tax had gone up by eighty-eight pence each month.
There was a letter from the vets saying that Treacle’s kennel cough vaccination was due.
There was another letter from the vet saying Fudge’s annual once-over was overdue… this letter dated the day he actually had that done.
There was a letter from the building society saying that due to increases in the interest rate our mortgage repayments would stay the same (!)
There was a letter from the house insurance people about this year’s renewal. Last year I realised that I saved quite a bit of money by paying for it all in one go rather than in monthly instalments. I phoned them and had a chat – I was interested to know if my mobile phone was covered for accidental damage by the policy I had with them. It wasn’t.
There was a letter from HMRC (the income tax people) saying I owed them a hundred quid.
There were quite a few more letters… I shoved them back in the letter rack. I’ll look at them next time.

"Daddy’s Little Angel TM" phoned. Was I hungry? We went for McDonalds, then I drove her to Rochester where she had a business appointment (you go, girl!). Whilst she did her thing I wandered up and down Rochester High Street hunting geocaches.
I found a rather good one in the library.

We came home, and I took the dogs round the road. I then made myself comfortable in front of the telly and watched and slept more “Red Dwarf” via Netflix.

"er indoors TM" boiled up a rather good bit of dinner, then we went round to Arden Drive where the clans had gathered. It was good to catch up… we hadn’t done that for a little while. Must do it again soon.