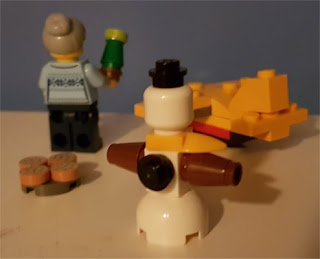 I was sleeping very well until the puppy pushed up alongside me and started scratching. This lasted (on and off) for a couple of hours. Eventually the puppy settled down and I dozed off. I was amazed to find it was nearly eight o’clock when I finally woke. I thought it was much earlier; it was so dark outside.

I scoffed my toast with my Fudge sitting next to me. And (as usual) I had a look at the Internet. I saw something which made me stop and think. An on-line shop was offering vouchers worth five per cent off of your next shop with them in exchange for favourable reviews on Google. They were making this offer to compensate for a shitty review that someone had given them.
I’ve often wondered about these on-line reviews. For all that I do them (quite a bit) I wonder just how reliable they are. How many people *really* bother giving a good review for no reward? When I used to review pubs on “Beer in the Evening” it was painfully apparent that several pubs were getting their mates to big them up.
I also had an email from the Geocaching Association of Great Britain. They had a questionnaire they wanted me to fill in. They are doing a survey to find out what they should be doing. Oh well… at least they are trying to find out what they should be doing… Mind you I’m not sure they should be doing anything. Seemingly rather irate at being labelled as “just another Facebook page” I have been reliably informed that they are actually “just another Internet forum”. I’d never really heard much about them until a couple of months ago, and now that the stupidity of trying to force a schoolboy to take office in a national organisation has passed, I suspect I won’t hear much in the future.

I then made the mistake of posting something on a Star Trek Facebook page. Star Trek fandom has always been one big argument, and having been less than hysterically over-excited about Star Trek: Discovery I’d inadvertently upset someone. I couldn’t work out whether this person was twelve years old, or a social misfit. After a while I gave up trying to reason with him, her or it. After all it is bad form to engage in a battle of wits with an unarmed opponent.

I had intended to walk the dogs as I do every morning when not at work. But it was raining hard and *very* cold, so I put “Still Game” on Netflix and waited for the rain to stop (whilst the washing machine did its thing on my T shirts).
It didn’t stop.
By mid-morning the rain had given way to sleet, so I put another wash load on.

I was just about to go to bed for the afternoon when I got a text from nice-next-door saying that the fence was in a state. I went and had a look… it was. Realistically I made a mistake putting up panels that are six feet high. I’ve bodged the fence, and when I get time (and volunteers) I shall replace the panels with shorter ones.
I then went to bed rather colder than I had been, but eventually warmed up and got a couple of hours sleep.

I got up and thought about taking the dogs out. But it was cold and wet and they weren’t interested. The weather has got to be bad it they don’t want to go out. So I updated my Lego Advent Calendar album and sat about waiting for"er indoors TM" to get home.