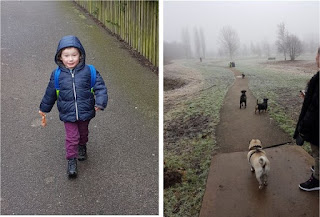 I had possibly the worst night’s sleep I’ve ever had last night. With "er indoors TM" off out for the night on the razzle the puppy wouldn’t settle, and had barking fits every fifteen minutes until 3am. I managed to get three hours sleep, but it wasn’t long after 6am that my phone gave me all sorts on notification alarm messages even though they were all turned off.

As I scoffed toast, Facebook told me that several people had their birthdays today. I spent a few minutes sending out the birthday video that I made up a while back.
Other people’s birthdays amaze me. Why have I aged so badly? It’s not as though I don’t do any exercise? People who look ten years younger than me are actually ten years older. And when will maturity come? Some *seriously* normal people are little more than half my age.
I then spent a little while trying to solve more of the puzzles on the virtual pub crawl in London. Herculean efforts got us past yesterday’s sticking point but now we’ve got to a pub not a million miles from Liverpool Street railway station. We need to read the plaque by the door. Can we find it on Google images? So… I’m reliably informed that one of my loyal readers is occasionally not a million miles away from Liverpool Street so I’ve sent instructions…

I popped the leads on to the dogs and we walked round to Newtown. We’d decided against out usual long Sunday walk as the weather forecast had been against us. I think we were probably right to have done so. Today was bitterly cold with a freezing fog.
We soon found "Daddy’s Little Angel TM" and "Stormageddon - Bringer of Destruction TM". Littlun immediately took charge of the dog poo sacks, and we did a little circuit out to the playpark at South Willesborough and back again. It was a shame that "Stormageddon - Bringer of Destruction TM" insisted on going into the playpark. We had fun going “Grandad-fast” on the roundabouts and going “Grandad-high” on the swings, but he wouldn’t be told what bits of the playpark to avoid, and all too soon he was soaked from the melting ice on the slides. Cold and wet, he whinged and whined all the way home. Not even the promise of putting the dog poo into the bins could cheer him up.

We came home, and I made a point of washing the dogs’ paws. Just lately there has been a lot of talk of the need to do so as dogs get salt on their paws form the salting and gritting of the roads, and yesterday I noticed Fudge constantly licking his paws.
Both hounds seemed not too bothered about having their paws done, and bearing in mind that half the day had gone, I went up the KFC for lunch, and devoured it whilst watching an episode of “Still Game”.

Having been up most of the night I wasn’t feeling that lively, and the forecast rain had arrived. So had "er indoors TM" (she’d brought cake!).
I sat on the sofa and spent much of the afternoon geo-puzzling. It gave me something to think about. Have you looked at the geo-puzzles in London? There seems to be this unwritten rule that any such puzzle in London has to be nigh on insoluble. Four hours brain-strain and co-operative effort gave me eight solved puzzles.

I wonder what’s for tea. Whatever it is can only be better than last night’s bag of crisps and some ice cream…