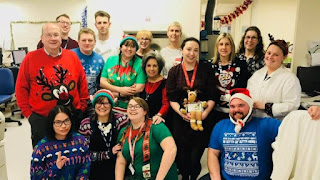 A pitiful whimpering woke me at 3am. Fudge wanted to get up on to the bed. He probably could have got up himself, but he knew I’d pick him up. I didn’t really get back to sleep after that. I got up after a couple of hours and watched the first episode of the new season of “The League of Gentlemen”. It was rather good.

I then had a quick look-see at the Internet just in case anything had happened overnight. Nothing had happened on Facebook, but last night I’d messaged the chap who’d set the pub crawl in London to say I thought we’d gone awry… we had.
He asked to see our workings so far, so I sent him what we’d come up with.
I wonder what he’ll say?

I scraped the ice from my car and set off to work through a morning of minus four degrees. As I drove the pundits on the radio were talking about some scandal in the prisons in Liverpool. In all honesty I don’t know what the scandal was. The chap being interviewed mumbled and muttered but didn’t actually make himself comprehensible at any stage. You’d think that Radio Four would sound-check people to ensure that they could be heard before allowing them prime-time radio.

I made a little diversion to Sainsburys in Aylesford before work. I got petrol, some fizz for Boxing Day, and some attitude from the cleaner. I asked the cleaner in Sainsburys where I might find the fizz. His words were that he didn’t know where it was; his attitude was “F… off Fatso!”.

I got to work where I had a hot day. Today was Christmas jumper day, and I sweltered. I also had a busy day. I won’t go into details, but I will say that if you are considering having a medical emergency, don’t have it under a private medical insurance policy.

And then home. I ran the pups round the road, then being Tuesday the clans gathered. Being the last Tuesday before Christmas, we’d arranged a little party and I think it passed off rather well. Three pints of stout and a bottle of port… hic !!!