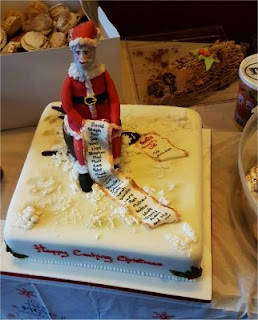 There is nothing quite like having just done a couple of night shifts to give me a good night’s sleep. Such a shame that “nice next door” had to have noisy sex quite so early this morning. Her squeal and screams woke me just after seven o’clock, and two minutes later a particularly vigorous “oh YES oh YES!!!” woke the puppy who leapt bolt upright in shock.
I opened the second window of my advent calendar, then made myself some toast. As I scoffed it I had a look at the Internet. It was still there. I had several emails, none really worth mentioning.
The Geocaching Association of Great Britain came in for some stick. Having made great show of introducing themselves to the Kent branch of the Tupperware hunters, the chap who’d made the overture had announced that living in Tyne and Wear meant he was too far away to actually *do* anything practical. Bearing in mind the chap who does live locally hasn’t got in touch, hasn’t replied to messages and wouldn’t seem to win any popularity contests, I think the GAGB must be dead in the water. Which is a shame.

I saw one article on a work-related Facebook page that wound me up. An eighty-four year old doctor (admittedly in the USA) has had her doctoring licence revoked because she flatly refuses to have anything to do with computers. How does she keep records, administer prescriptions, get the results of lab tests… Leaving aside the fact that computers are central to how I do my job in the hospital, I use computers to keep my skills and knowledge up to date. How on Earth does this woman keep abreast of current developments without access to the Internet?

"er indoors TM" went shopping; I took the dogs round the park for a walk. I’d forgotten about the Park Run people, but fortunately they didn’t seem to be doing a run today. As we walked we met a few other dogs. Fudge straggled miles behind, Treacle wouldn’t leave my side. An average walk, much the same as ever. But it was nice not to have to wash poo from a little girl’s face when we got home.
I then sat on the sofa with my dogs watching Alexei Sayle videos until "er indoors TM" came home from shopping.

We settled the dogs, then made our way to Leybourne (via a couple of geocaches) where the Hunters of Tupperware were staging the county Christmas party. We’d arranged to meet Karl and Tracey half an hour before the event, and we had a rather good dinner. We then spent a few hours with all sorts of friends. It was so good to catch up. Nick had organised the event and it was rather good. Catching up with friends is always good; the home-made scoff was excellent, and we had custom-made M&Ms. And we had such fun with the raffle; alternately cheering and jeering the winners. Certificates of achievement were awarded to people according to their geo-scores, but in such a way that the numbers didn’t really matter.
I took nearly a hundred photos of the event.

After a gallon of ale and far too much port we wended our way homeward where the puppy tried to eat the pressie I won in the secret Santa draw.
I think an early night is in order… let’s hope next door doesn’t start feeling fruity too early tomorrow morning…