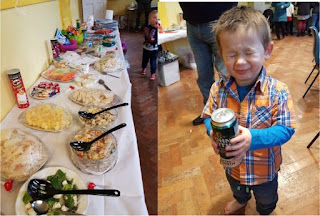 I slept like a log and despite far too much ale last night I woke feeling refreshed and raring to go. I looked at the clock and saw it was only a quarter to three. I then lay in my pit for three hours trying to get back to sleep. I gave up at six o’clock and came downstairs. I looked at our new smart meter and saw that we’d used fifty-six pence worth of leccie and gas since midnight. How had we done that?

Over brekkie I watched yesterday’s episode of “Thunderbirds are Go” and I found myself getting rather upset when Sherbet (Lady Penelope’s little pug) was in peril.
I then fired up my lap-top to see what had happened in cyber-space overnight. The photos I took at yesterday’s geo-party had received favourable comments; quite a few favourable comments.

As "er indoors TM" performed her morning ablutions I took the dogs round the park for a walk. Again I forgot the Park Run was on; today it was the children’s run. There was a couple of dozen children being bullied round the paths by parents who were very keen that their offspring should enjoy running just as much as they do. Even though the children clearly hated it. Two kiddies seemed to be running in their pyjamas.
Still, the run was better than it has been. Over the summer there were literally hundreds of people running/ Far too many really. Personally I don’t see why they can’t stage the run at the Julie Rose stadium (somewhere purpose-built for runners).

We settled the dogs, collected "Daddy’s Little Angel TM" and her entourage and pausing only briefly for petrol set sail to Hastings. Just as we were getting petrol my brother sent a message. Had we remembered something-or-other? Woops – we’d forgotten it. But the traffic trying to get to the outlet centre was so bad that getting back home wasn’t practical. There was so much traffic when we left home that we could have walked to Newtown quicker than we’d driven.
What *is* the attraction of that outlet centre?

We popped in to see mother-in-law for ten minutes, then drove up to Hollington for the annual extended family Christmas party. I took a few photos of what went on; there was a ball pit and bouncy castle for the littluns, party games for kids of all ages, a rather good spread, and Santa came to visit too. It was a rather good session; the only fly in the ointment was the ale selection… next year I’ll get the ale in.
I slept for most of the drive home…

"er indoors TM" has gone bowling. I’ve programmed “Hannah” for tomorrow… I shall slob about in front of the telly for the evening. I‘ve eaten too much at the party this afternoon and given myself guts ache…