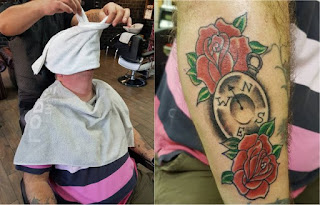 I took a little while to nod off last night; nice-next-door were doing “noisy sex”. It lasted for about half an hour and then seemed to fizzle out. This was different to previous sessions of “noisy sex” which have got more vigorous as time progressed.

Over brekkie I spent a few minutes on a virtual pub crawl. There is a geo-puzzle in London which goes from one pub to another before finally leading you to a geocache somewhere in London. The idea is that you do the pub crawl; most people seem to start and give up and have to come back later. Through skill, genius and pot-luck (together with Gordon) I’ve got about half-way along the trail using Google.
Our co-operative effort has got us to stage eight of fifteen, but we are struggling to get a close-up of a particular sign. If any of my loyal readers have any reason to go to the post-code area EC2M 1RP could you drop me a line and I’ll give details of what I need you to photograph for us…

We settled the dogs and drove down to Folkestone. A couple of weeks ago Jose was waxing lyrical about the wonders of a hot towel wet shave, and said I should have one. Today we did. We drove up to the top of Cheriton; I was a tad concerned to find ourselves in the vicinity of Cheriton’s notorious “rub-and-tug” shop but my fears were unfounded.
Have you ever had a hot towel wet shave? It’s rather good. They strap your head up in hot wet towels, then lather your face up, and scrape it off with an old cut-throat razor. Then they hot-towel your head again and give you a rather vigorous massage. During all of this you get a bottle of rather decent lager. Admittedly it was nowhere near as close an actual shave as I get at home, but for an experience it can’t be bettered. Jose took some photos whilst I was in the chair.

We then went for a little shopping in “The Range” where I got a couple of dog chew-toys, and then it was lunch time. Parking in Folkestone town centre was tricky, but eventually we met Jose and Maria at the Samuel Peto hand had a rather good bit of lunch. Everyone else had burgers, but I had turkey; It *is* nearly Christmas after all. I also had a couple of winter ales; I must admit they were a disappointment.

It would have been good to have hung about in Folkestone, but "er indoors TM" had plans for the evening and we’d left the dogs long enough. We came home, "er indoors TM" set off to wherever it is she’s gone to, and I took the dogs round the park. Today’s walk was dull; there were a few surly teenagers whose faces lit up when they say my dogs, but the walk passed off without incident.

Once home the dogs soon settled, and I went up the road to the tattoo shop. I’ve been promising myself a certain tattoo for months. I’ve got *my* compass between a pair of roses. Unlike previous tattoos it didn’t hurt *that* much, and unlike previous tattoos now I’ve got it I don’t think I like it very much.
I wonder how long it will be before I can get a cover-up done?

I came home and fed the dogs and gave them their chew toys. They immediately swapped them, then Fudge took both. I spent a few minutes refereeing the squabble until they sorted themselves out. Fudge spent the a while chewing his; Treacle spent a while guarding hers until she fell asleep. Having forgotten to book my cinema ticket (sorry Jose!) I made myself comfortable in front of the telly. Fudge then came and sat with me whilst I watched a film on Netflix. “Approaching the Unknown” was supposedly about the first manned mission to Mars. I think it is fair to say the film would have benefitted from some input from anyone who’d actually ever given any thought whatsoever to the logistics of space flight. With plot holes big enough to fly a space rocket through it wasn’t a good film.

I did have an invite to go to the ex-works Christmas bash tonight. Part of me wanted to catch up with old friends. Part of me remembered why I resigned.

I suppose I shall watch a couple more episodes of “Still Game” before bed.
I wonder if nice-next-door are going to have noisy sex again? Perhaps I might go ask them…